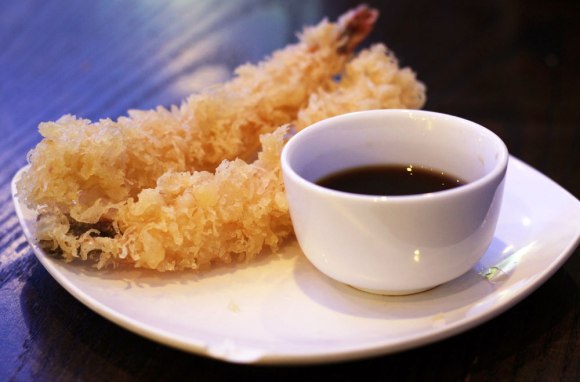 I found out about Kikoo on Groupon, of all places. Whenever I’d search for sushi, Kikoo would be there, right at the top: “Up To 53% off All-You-Can-Eat Sushi, Sashimi, and Teriyaki with Drinks.” Honestly, all-you-can-eat sushi sounds like a terrible idea, so I was never really all that tempted to click the link. I guess it got to me, though, because—well, I just got back from my first Kikoo feast.

Before I bought the Groupon, I called Kikoo to ask about allergens, and after some initial confusion, the woman on the phone informed me that they are no tree nuts in anything on their menu, but that one roll—an avocado roll—comes topped with peanuts. I double-checked with the hostess when I arrived, too, and she confirmed what I was told on the phone, so I figured I was good to go.

When we sat down—I’d brought Sam along, as I wasn’t about to try to take on any sort of all-you-can-eat deal on my own—we were given an iPad with which to order. No need to flag down a server at Kikoo; you just throw what you want into a (digital) shopping cart of sorts and then hit the order button. You’re limited to 10 items at a time, but you can order as often as you’d like—and the food just keeps coming. And coming. And coming.

Now, let me make this clear: I think all-you-can-eat dining is inherently revolting. It’s gluttonous, greedy, and quintessentially American in that way that never fails to evoke a whole lot of shame—but it’s also kind of fun to be able to order whatever (and however much) you want without having to worry about over-spending. It’s nice to be able to sample widely, too, which was what I tried to do at Kikoo. 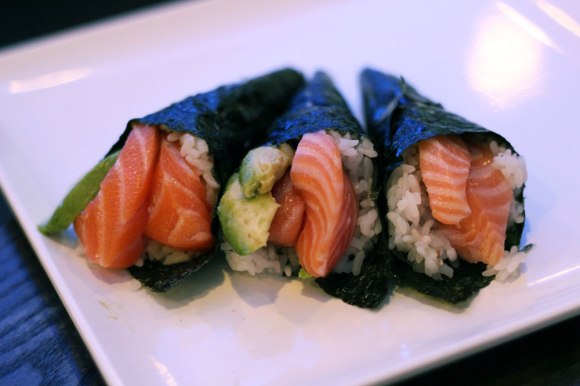 Unfortunately, nothing was all that great—but I didn’t really expect it to be, given that I was paying by the two-hour block. The rolls (both hand rolls—pictured above—and cut rolls) were probably the best thing I tried. Unlike the sushi and sashimi, the fish in the rolls wasn’t ice-cold—which did a lot for their cause—and unlike the fried dishes, they (obviously) weren’t super greasy, which was refreshing, at least. A few of the rolls, though, were filled with this sickeningly sweet rice; those were probably the worst thing I ate.

The salmon cut roll and the salmon hand roll were both decent, and the salmon-avocado hand roll was actually pretty good. I liked the shrimp tempura (pictured at the top of this post), too—but I’m pretty sure that’s at least partially due to the fact that I’ll probably enjoy any fried shrimp dish that’s put in front of me. The sweet potato tempura was a little worse (but still all right), and the soft-shell crab was awful. I wouldn’t have been surprised if our server had returned to tell us our crab was actually chicken, and that we’d received it because of a kitchen mix-up. But no, it was crab—and yes, it was bad. 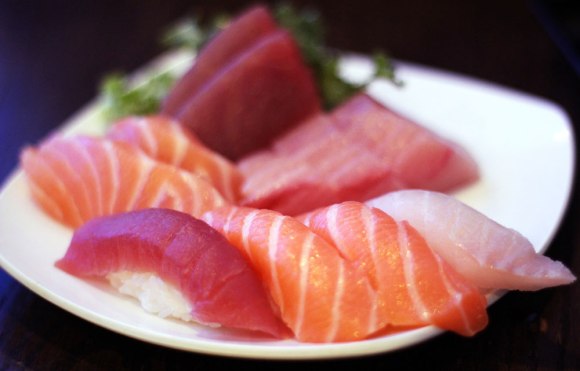 As I mentioned, the sushi and sashimi (pictured immediately above) were both pretty much freezing—and the flavors weren’t all that, either. On top of that, the selection was pretty small: salmon, tuna, yellowtail, and snapper, when I was there. I guess it makes sense, though. Can’t really serve expensive fish in an all-you-can-eat setting. (But I can dream, can’t I?) Still, there was one problem I couldn’t quite get over: the all-around lack of flavor in all of the fish—and the soy sauce, too. Heartbreaking…and infuriating, when it came to the soy.

But for the most part, what Kikoo lacked in quality, it made up for in quantity, so I did end up leaving satisfied. Not so satisfied that I’m itching to go back, mind you—but pleasantly full nonetheless. (Who am I kidding? I’ll most likely be back within the next few months. You know, once I’ve forgotten just how cold the fish was. It was a safe meal, after all.)

If you, too, are in the mood to stuff your face with low-to-average-quality sushi, you can find Kikoo at 141 1st Avenue, between 8th and 9th. (And if you’re interested, there’s a Groupon available that’ll save you a decent amount of money.)

[Three or four months after I started eating at Kikoo—and believe me, I started—they added (cooked) salmon belly to the menu, and it’s awesome. I took down, like, four orders the other night. (I’m disgusting.) Anyway, I think I’ve figured out how best to approach Kikoo…for me, at least: some sashimi (salmon), a roll or two (…salmon), and a few—only a few—cooked dishes (tempura, katsu, salmon belly, whatever). I don’t know why their salmon sucks so much less than their other fish, but it does. And too many fried dishes make for a bad night indeed.]

5 thoughts on “Kikoo Sushi: For when you’re feeling gluttonous”