I really didn’t think I needed another taqueria…until I ate at Los Tacos No. 1. I’d read good review after good review, and I’d heard their kitchen was pretty much nut-free, so I felt like I’d be cheating myself if I didn’t at least give the place a chance—and I’m so very glad I did.

This particular taqueria is located in the heart of Chelsea Market, Chelsea’s perpetually overcrowded, tourist-filled shopping mall. I was really hoping I’d hate Los Tacos just so I wouldn’t have to start wanting to make regular trips to such an out-of-the-way hellhole, but I just couldn’t bring myself to form a negative thought about the place. It’s that good.

First things first, though. I didn’t see anything that looked like it’d contain any nuts on the menu, but to be safe, I did send Los Tacos an email. Within a day, I received the following (very brief) reply: “Los Tacos No. 1 is completely safe for anyone with nut allergies.” I would’ve appreciated some more information, but I suppose that was all I really needed to hear. (Still, I’ve categorized them as “technically not nut-free,” as I don’t think they require allergen statements from their vendors, nor do they advertise themselves as a nut-free restaurant.)

When I arrived, the woman who took my order confirmed what I’d been told via email: no nuts in anything. I ended up getting two tacos—one carne asada taco and one adobada (marinated pork)—and both were absolutely delicious. The carne asada (pictured at the top of this post) comes topped with cilantro, onion, salsa, and an avocado-based cream sauce, and overall, it’s pretty damn good. The beef itself is soft and juicy, and the creaminess of the avocado complements the smokiness of the meat wonderfully.

But as good as the carne asada tacos are, I prefer mine with adobada. The pork itself—which comes topped with cilantro, onion, salsa, and pineapple—is always freshly-carved, and though it’s a little spicier than the beef, I love it just as much. The first time I ate at Los Tacos, the pineapple actually caught me off guard; I wasn’t expecting to bite into anything sweet, but goddamn, those slivers were good, especially as a break from the heat of the pork and the salsa. I had trouble getting a decent photo amid all the Chelsea Market hubbub, but this post wouldn’t be complete without some sort of image of my favorite Los Tacos offering, so here’s (evidently) the best I could do: 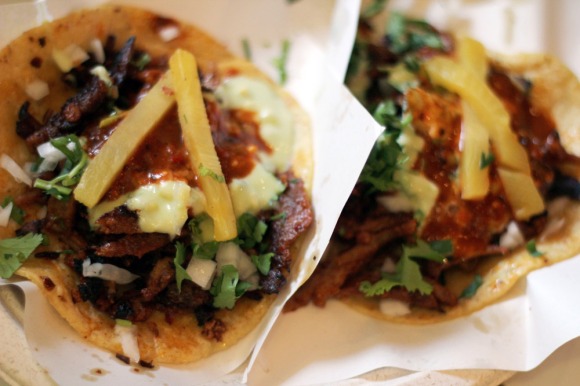 Despite the location, I can’t stay away from Los Tacos—and fortunately, it never disappoints. Their chips and guacamole are absolutely perfect, and the quesadillas aren’t half bad, either. Though it reminds me a little too much of a Taco Bell Chalupa, I particularly like the the pork especial, which is a lot like a fried quesadilla. (It comes with pineapple, so matter how much resemblance it bears to a Chalupa—ugh—I just don’t stand much of a chance against it.)

If it isn’t sufficiently obvious: I really, really, really recommend Los Tacos. These people sell some of this city’s absolute best tacos, and you’ll be doing yourself an enormous disservice if you let the horrors of Chelsea Market scare you off.

Find Los Tacos No. 1 in section B of Chelsea Market, which is located at 75 9th Avenue, between 15th and 16th. (And as a bonus: Los Tacos is a 30-second walk from Eleni’s, one of New York City’s only nut-free bakeries. [Note from the future: Eleni’s no longer has a Chelsea Market storefront.])