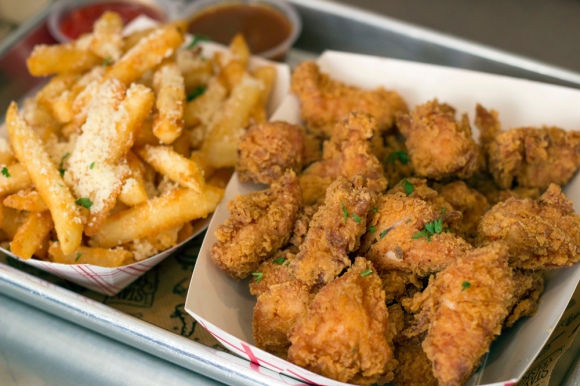 Something about the name of this place gives me the willies. I think it’s how similar it sounds to “sticky finger joint,” which makes me think of a 5-year-old’s slobbery, paste-covered knuckle. But I digress. Name aside, Sticky’s is a solid restaurant with some solid chicken, and even I wouldn’t be so absurd as to stay away based on the name alone.

Truthfully, the reason I stayed away for so long was because I found it hard to justify going out of my way for a serving of plain old chicken fingers. But once I finally got around to giving their food a try, it was clear that there would be no turning back. Sticky’s is good.

Last semester, when I was looking to collect some new places to grab lunch between classes, I sent an email to Sticky’s with a few questions about their handling of allergens. The response I received was as follows: “All Sticky‘s Finger Joint Locations are completely nut free. So, to answer all of your questions Sticky‘s is safe to eat for anyone with any type of nut allergy!” No details, no direct responses—but you know what? That’s a one-size answer I can get behind.

Now, I can’t categorize Sticky’s as “truly nut-free,” as they don’t openly classify themselves as such, and I haven’t gotten any indication that they require their ingredients to all be free from potential cross-contamination, but I feel 100% comfortable eating there. You may not—and that’s fine—but I’d say the place is worth a look, at the very least.

For such a simple spot, their menu‘s pretty big. Chicken fingers, chicken poppers, and fries all come with a bunch of different combinations of seasonings—and Sticky’s offers 19 homemade sauces, too. My favorite, because I’m boring, is the Sassy BBQ, but there’s no sense in pretending there’s a best or a worst. You’ll just have to figure out your ranking on your own.

As sides go, I’m partial to the Truffle Parm Fries (pictured in both photos above). They’re not all that truffle-y, but they’re certainly covered in parmesan, and the fries themselves are crispy on the outside and soft on the inside, just as fries should be. (Seriously, they’re perfect. These are some of the best fries you’ll find at this price point—and with about a trillion seasonings to choose from, too.) I also like the Pot Pie Fries, though I could definitely do without the shredded carrots. (Also: “Grandma’s Gravy” bears no resemblance whatsoever to any sort of gravy I’ve ever seen, but it sure is tasty.)

With their chicken, it’s hard to go wrong. Their fingers and poppers are some of the best of their kind—as they should be at any store that specializes in such a simple preparation of chicken. The poppers (also pictured twice above) are particularly good—they’re incredibly moist and tender, with a nice, crispy exterior—and though they’re a little bland, they never fail to please me. (A tip, though: The chicken doesn’t keep or travel well. A 10-minute walk to Washington Square Park—or, God forbid, a bicycle ride to my apartment—turns Sticky’s into a very mediocre meal indeed.)

In all, though, Sticky’s is great spot to grab a quick (and cheap!) lunch, and I highly recommend stopping by, whether or not you’ve been tasked with avoiding nuts. At the very, very least…well, it sure beats McDonald’s.

Sticky’s has three locations: one in Murray Hill (484 Third Ave), one in Greenwich Village (31 West 8th Street), and one in Hell’s Kitchen (598 9th Ave). All three deliver, and their food’s available on most third-party delivery sites, too. Just make sure to get your sauce on the side, because soggy fries—especially those that would otherwise be perfect—are even worse than sticky child-fingers.