I love omusubi, but I hardly ever find myself going out of my way for any. Usually, I’ll just wait to scoop some up until I happen to be near one of my handful of favorite Japanese markets—so imagine my delight upon finding out about Hanamizuki, an omusubi-centric Japanese café that originally seemed like it might finally give me enough excuse to make an outing (and a meal) out of a few balls of rice.

Hanamizuki’s menu is small (and entirely nut-free, per a conversation with a cashier and a phone call I made before showing up). Aside from the expected café fare (coffee and tea; sake, wine, and beer), they offer 10 sorts of omusubi—some with vegetables, some with meat or fish, one with Spam—and a few miso soups and side dishes, too. After 6pm, the menu widens (just a bit), but there’s still hardly anything on it; of course, that’s all right, because this place isn’t about breadth. Hanamizuki’s focus is on omusubi. They’re one of those places that pays careful attention to one thing and one thing only—something I love to report, given how allergy-friendly these sorts of single(-ish)-concept menus tend to be. 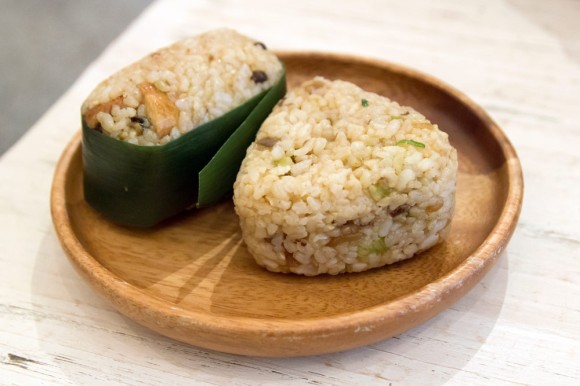 Unfortunately, though, Hanamizuki is not the game-changer it at first appears to be. It’s a nice space—very cute, very cozy—that feels totally cut off from the decidedly un-cute, un-cozy block it’s on, but that’s about all this place has going for it. The staff aren’t particularly friendly, nor are they very allergy-aware: the cashier I spoke with initially dismissed my question of whether there might be any nuts in anything, and when I pushed, it came out that she thought soy was a nut. (I asked, too, whether the nut-containing [wrapped] cookies at the register might’ve been made on-site—a rather standard double-check-type question that the vast majority of like employees are happy to answer—at which point she seemed to get annoyed. I didn’t need her cooperation; the cookies are made elsewhere, so there really are no nuts to avoid in Hanamizuki’s kitchen. But it wasn’t a pleasant exchange.)

Contrary to what the previous paragraph might’ve led you to believe, though, I don’t care all that much about staff friendliness. What I do care about is the quality of the food, and—it’s time to come out and say it, I guess—Hanamizuki’s just isn’t very good. The omusubi, meant to serve as the main attraction, are extremely underwhelming. The rice is fine, and most of the other ingredients are admissible, but these things just aren’t worth going more than a block or two out of your way for. They’re light on the fillings, and most taste like they’ve been sitting around all day. They’re cute, though. Ridiculously cute. I’ll give them that.

I’ve tried a handful of the rice balls (all that have been available when I’ve stopped by, actually), but I can’t quite say that I’ve enjoyed any. None were horrible, but absolutely all were dull—especially the sweet potato, which is made with chunks of Japanese sweet potato, hijiki seaweed, and (ostensibly) deep-fried tofu and white sesame, too. For all I knew, though, those last two might not have even been there. I tasted the sweet potato—it might as well have been raw—and I saw the seaweed, but really, that was it. And the sukiyaki (“Japanese premium beef, burdock root, konjac and scallions”) was even worse: comically little beef, and next to no flavor, other than that of…well, an antique store. (Dumb, I know. But for real, that’s the most accurate comparison I have…and that thing really did leave my mouth tasting as if I’d just licked a very expensive armoire. Just telling it like it is, y’all.)

The unagi, though not particularly fresh-tasting, was all right—it tasted distinctly like eel, at least—and the wakame (“wakame-seaweed, yukari, shisonomi-pickles and shibazuke-pickles”) was tolerable, but again, these omusubi are boring as hell. And as I’m pressing myself for something to say in their defense, all I’ve got—absolutely all I’ve got—is that the rice itself is rather decent. It isn’t cold or hard or funky or strange; in fact, it’s sort of good, and it goes a long way in keeping these rice balls away from the category of the outright bad. So thanks, Rice, for allowing these balls to join the ranks of the mediocre.

To be clear, though, I don’t hate Hanamizuki; surely, I’d pop in for a rice ball or two if I already happened to be nearby. (I pop into lots of places for lots of mediocre snacks, mind you. I eat 7-Eleven taquitos, for crying out loud. Put a [nut-free] snack-like creation on my radar and I will crave it, sooner or later.) I’d just never, ever get on a train with the explicit intention of ending up at Hanamizuki ever again. Their omusubi just aren’t worth any sort of special trip. Sorry.

Stumble upon Hanamizuki at 143 West 29th Street, between 6th and 7th Avenues.

One thought on “Hanamizuki Café”