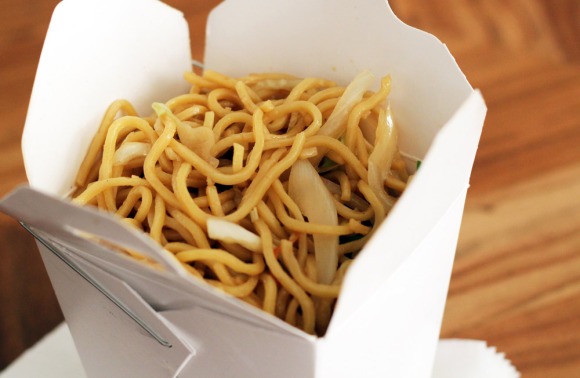 For a while there, bagels were my holy grail. They just seemed to be the one thing I couldn’t even come close to finding, and for a while there, they were the food I wanted most, too. Since finding a workable bagel place, though, I’ve realized (remembered, really) that there are plenty of foods that are much harder to safely source—and at the top of that list is Chinese.

Takeout Chinese food (authentic, inauthentic, and everything in between) is hard not to love. But Chinese restaurants seem to all use nuts, and the nature of wok cooking is such that cross-contamination is a very real possibility. A restaurant would need to be nut-free in order for me to feel safe—but in all the time I’ve spent on this planet, I’ve never so much as heard of a nut-free Chinese restaurant. Google searches lead almost exclusively to recipes, unanswered questions, and questions with unhelpful answers. So basically, I figured the situation was hopeless.

I used to eat Chinese takeout pretty often, but I stopped when I got old enough to understand the risks involved. By now, it’s been years (and years) since I’ve dug into some spring rolls, chicken with broccoli, or my favorite: pork lo mein—and naturally, my craving has been building since then. I’m getting tired of abstaining, though, so I figured it was time for me to start combing through menus, sending emails, and making calls.

One of the (very) many restaurants I looked into was Han Dynasty, a Sichuan mini-chain with two New York City locations: one in the East Village, and one the Upper West Side. I’d sent them an email, but got impatient while waiting to hear back, so last Friday afternoon, I decided to give Han Dynasty a call. The man I spoke with understood my question—which is uncommon, no matter what type of restaurant I’m calling—and sounded confident when he assured me that they didn’t use any tree nuts in anything. He even double-checked on whether I could eat peanuts and sesame seeds, which was a good sign.

His apparent competence, combined with my absolute desperation for Chinese food, sent me (and my equally desperate boyfriend) running to Han Dynasty that same day. To be honest, though, this restaurant isn’t quite what I was looking for. I’m not really into spicy food, so Sichuan cuisine and I tend not to get along. But Han Dynasty does have a few dishes I’ve been known to lust after, even if those dishes aren’t the ones owner Han Chiang recommends. Still, I figured the place was worth a try, at the very least. After all, I’m hardly in a position to be choosy.

When we arrived, the guy who took my order reassured me that they don’t use any tree nuts or tree nut products in any of their dishes. They do use plenty of peanuts, though—and I figured it’d be best to try to avoid any dishes that explicitly contained peanuts so as to avoid any potential cross-contamination on that front. (It’s notoriously difficult to find peanuts free from tree nut cross-contamination, and I figured Han Dynasty was unlikely to be using a supplier that’d be safe for me. Better safe than sorry!)

Anyway, in an attempt to avoid both mouth-numbing spice and potentially-contaminated peanuts, I ordered something I’ve been specifically craving for a while now: pork lo mein (pictured above). Lo mein isn’t Han Dynasty’s speciality (they’re known for their dan dan noodles, actually) but I wanted to give it a try. Sure, it’s on the section of the menu marked “Kids & Baby Adults”—but I’m both, so perhaps the lo mein would be perfect for me.

I also ordered the Taiwan pork belly buns, not expecting them to be filled with crushed peanuts (though I should’ve known, because gua bao usually are). As soon as Sam bit into one, though, he told me there was something nut-like and crunchy in it, so I decided it’d probably be best for me to stay away.

I did eat the lo mein, though, and it wasn’t half bad. It wasn’t the best lo mein I’ve ever had, but I certainly did enjoy it. Pork lo mein is pork lo mein; rarely is it ever intolerable, and I took this helping down without issue, despite its oversized vegetable chunks. It was certainly on the bland side, and the pork itself was a bit too starchy—but hey, safe Chinese food. There’s only so much I can bring myself to complain about. 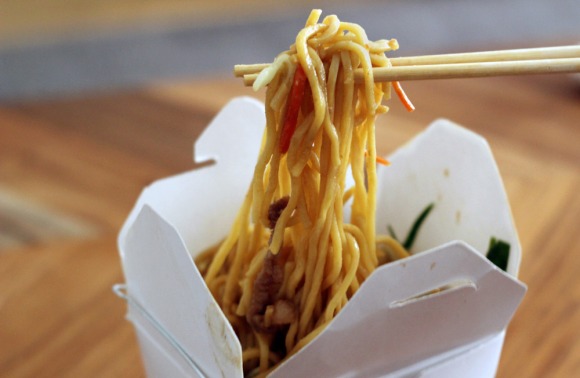 I’ve since tried the scallion pancakes, too—another dish that isn’t quite recommended—and though I have very little to compare them to, I can confidently say that I liked these a whole lot. They’re crispy, greasy, and satisfying, and though they aren’t the most flavorful thing in the world, they do hit the spot.

So…while I didn’t try anything I should’ve tried, and while my opinion is probably heavily tainted by desperation, I’m more-or-less satisfied with Han Dynasty. Maybe (hopefully!) someone out there will read this and put this place to better use than I ever will. But for now, I’m going to go order some more lo mein and continue my search—with a little less desperation, fortunately.

Find Han Dynasty at 90 3rd Avenue, between 12th and 13th, or at 215 West 85th Street, between Broadway and Amsterdam. Of course, they also deliver—and if you, like me, live too far away, their food’s also available through Doordash, Postmates, and Caviar.