[Edit: As of October 4th, 2016, Ganso Yaki and Sushi Ganso are both gone-so. I happened to have been at Yaki on October 3rd, and they gave no indication whatsoever of their imminent closing. They’d just redone their menu, too. So heartbroken.]

Ganso Yaki was on my radar for a while before I finally made my way to Brooklyn to give it a try. “Japanese soul food” in a super-casual setting? It sounded pretty good to me. Little did I know that Sushi Ganso had recently opened right next door—or that there’s been a Ganso Ramen a few blocks away for a while now, too.

The best part, though, is the news I recently received from Ganso Yaki co-owner Harris Salat. I’d sent him a few questions about nuts and cross-contamination, and his reply was as follows: “I checked with our chefs, we do not use tree nuts in any of our kitchens at Ganso Ramen, Ganso Yaki and Sushi Ganso.” Good news. Great news. Three new safe Japanese restaurants? The best news, really.

Ganso Yaki, located in Boerum Hill, only a few blocks from Atlantic Terminal, serves up what’s basically elevated Japanese street food. (I hate that word. “Elevated.” Ugh.) They have tempura and ramen, too—and you can order off Sushi Ganso’s menu, if you’re so inclined—but the most interesting of their dishes are those that come off the grill.

One dish that really caught my eye was the Japanese Squid (pictured above, and in the header on Ganso Yaki’s website). It’s a whole grilled squid, served in a ginger-soy marinade—and it’s pretty decent. Really, it’s more fun to look at than it is to eat, but that’s not to say it’s bad. It’s not all that flavorful (its most prominent flavor is char, actually), but the squid’s texture is good, as are its aesthetics. (I mean—it’s a whole squid, legs and all. It’s super weird looking.) It isn’t something I’d order over and over, but it isn’t something I regretted getting, either.

My favorite dish (by far) is the Salmon Chan Chan—not because I dislike any of the others, but because this one’s absurdly good. The menu describes it as “Sapporo-style miso-grilled salmon, topped with salmon roe and shiso,” which doesn’t sound all that exciting, but I assure you: this hunk of fish is not to be doubted. I don’t usually like cooked salmon (in fact, I only ordered this dish because I’m a sucker for roe). But it was everything but the roe that hooked me.

The fish was cooked perfectly, and the sauce was sweet and miso-heavy—oh, and did I mention the entire dish was still sizzling when it arrived? For whatever reason, I couldn’t get a good photo of it, but it’d feel silly to publish this write-up without a picture of my favorite dish, so here’s one of my attempts: 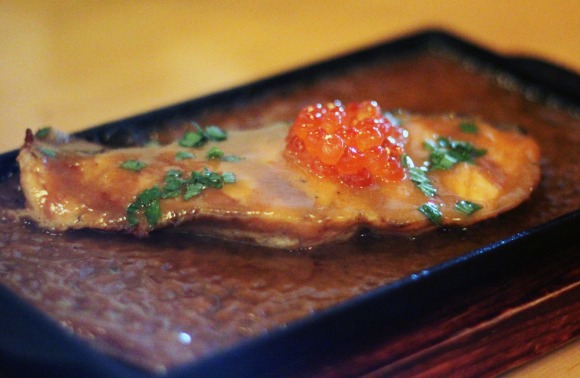 [Since publishing this post, I’ve eaten at Ganso Yaki a few more times, and I’d like to revise what I said above. Very often, the sauce on the Salmon Chan Chan is just too strong (and too abundant!). On such off days, the dishsort of sucks, so…I’d like to name a new favorite dish: the Hamachi Kama (yellowtail collar), also from the grill. It’s consistently delicious, and there’s no sauce to worry about, which is a nice plus.]

I’ve also thoroughly enjoyed the Yaki Shumai (pan-fried pork dumplings), the Kamo Kushiyaki (glazed duck on a skewer), and the Sapporo Ramen—though the latter reminded me a bit too much of chicken noodle soup, and was definitely my least favorite of the bunch. The shumai are delicious—though they do arrive in a scalding pan, which makes me nervous—and the duck is tender and sweet, if a bit boring.

Overall, Ganso Yaki is a solid restaurant. It’s one of those places where you can order freely without having to worry about ending up with something bad. Plus, the ambiance is pleasant—usually, it isn’t too loud, and usually, the music’s good—and the servers are friendly, which never hurts. The prices aren’t low, but they aren’t high, either—and if you’re dining between 5 and 7pm, a few dishes are discounted to $5, and select rolls (from next-door) to $4.

Find Ganso Yaki at 515 Atlantic Avenue, on the corner of Atlantic and 3rd. And stay tuned—because Sushi Ganso’s up next.