Before I begin, let me make one thing perfectly clear: The spelling of Yonah Schimmel’s last name varies. “Schimmel” is the more popular option—and it’s the one that the bakery’s own website uses—but the goddamn sign (well, the main one, at least) says “Shimmel,” so I don’t know what to tell you. I’m aware that none of this matters, and that at a certain point, discrepancies like this one just give way to a suite of dead-end philosophical questions (à la “what really determines a name?”)…but shit, man. Look closely at the above photo and you’ll find two votes for “Shimmel” and two for “Schimmel.” That alone makes me dizzy—but the trouble’s everywhere. Compare the Wikipedia page‘s title to its first few words, then join me in my discomfort. (As if.)

What I’m trying to say, I guess, is that I’ve settled on “Schimmel.” Now that I’ve stopped twitching, let’s begin:

I grew up knish-less. I ate my first ever at Katz’s, and that was a Coney Island (i.e. square) knish, which a purist would certainly dismiss as inferior. I like my square knishes, though, so I figured I might as well try some round knishes, too. And where better to try my first proper knish than Yonah Schimmel, America’s first (and most famous) knishery?

The menu’s small—there are knishes, bagels, and (on the weekends) latkes—so I figured I’d probably be safe. To be sure, though, I did call in, at which point I was told that there aren’t any nuts present in the kitchen. The bagels aren’t made in house (apparently, they come from a place called Natural Produce, which I haven’t been able to find online), but the knishes and latkes are indeed safe. (Safe in theory, at least. There are a few dessert-like knishes that I prefer to avoid, but that’s only for my own peace of mind, really. It’s not that I think I’d react; it’s that I think I’d spend the meal stressing. No point.)

Anyway. My feelings about this place are so, so mixed. There’s a certain appeal to the fact that the Schimmel family—yes, they’re still in charge—have been serving up these same knishes since 1910. Plus, despite the knishery’s fame, it’s managed to avoid the sort of hype that’s been known to take away from places like Katz’s. (I love Katz’s. But long lines and hordes of tourists? Not so much.) Yonah Schimmel certainly isn’t unknown, but it isn’t exactly a high-traffic spot, either. And despite all the knish-brags that cover its walls, it’s actually a humble little place: teeny-tiny and unapologetically cluttered, with a few tables that don’t quite seem like they’re meant to be sat at. And it’s calm and quiet, too; there’s hardly ever anyone inside.

Here’s the thing, though: The knishes blow. I want to love them. I really do. But they just don’t do it for me, and that’s around 95% due to the fact that the folks at Yonah Schimmel think it’s okay to fucking microwave them. Heads up: IT ISN’T. Without fail, the microwaving absolutely ruins whatever texture these knishes might’ve had—but I can’t really speak to that texture, because I’ve never had an un-microwaved Yonah Schimmel knish. (I’ve shown up early-ish, late-ish, and at whatever hour’s in between the two, but I’ve yet to end up at Yonah Schimmel at fresh-knish time. But I shouldn’t have to show up at some nebulous time of day to ensure that my food will be un-terrible.)

The flavor’s good, though—in most of the knishes I’ve tried, at least. The potato’s very plain, but a little mustard solves that problem; and mushroom (pictured in the foreground of the photo immediately above) and broccoli are both all right, too. Mixed vegetable (pictured below) is a little weird—it comes off like someone emptied the “vegetable” contents of a Cup Noodles into a knish—and they’ve been out of cheese knishes every single time I’ve ever stopped by, but whaddaya gonna do? (It’s not as if I really want a microwaved cheese knish, anyway.) 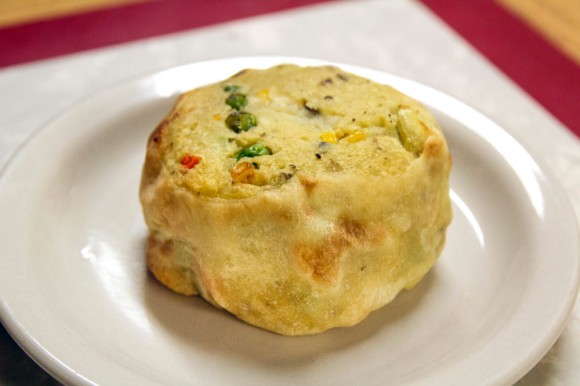 I will say, though, that I love the latkes. Microwaved, they’re just as soggy as you’d imagine, but the flavor’s spot-on, and they’re huge, too. I suppose you could take a few home and reheat them properly, but that seems like a whole lot of work for something that’s meant to be a grab-and-go sort of snackmeal. (The same goes for the knishes. I’m just not that motivated. But maybe you are.)

Maybe this stuff is great when it’s fresh. Maybe the knishes are moist; maybe the outer layers of dough stay crisp. Maybe the vegetables become, um…less canned. That’s what I have to tell myself, else I’d have to hate Yonah Schimmel—and that’s just not something I want to do. So that leaves me in a little bit of a weird position, I guess: I’d never recommend going out of your way for one of these knishes, nor would I necessarily recommend stopping in for one if you happen to be passing by. But I don’t know, man. There’s just something about this place.

…And I know it’s totally pointless for me to say that without offering any sort of elaboration, but it isn’t just a turn of speech; I really don’t know what it is about Yonah Schimmel that so softens me. Guess I’ll just have to keep going back, then—if not expressly in the hopes of getting my hands on a good knish, then in the hopes of figuring out why I’m so decidedly un-angry at these shitty ones.

Find Yonah Schimmel Knish Bakery at 137 Houston Street, between Forsyth and Eldridge. Bring cash—and if you want any latkes, be sure it’s a Friday, Saturday, or Sunday. (By the way, Yonah Schimmel is kosher-certified, but they’re open from 9:30am to 7pm every day.)