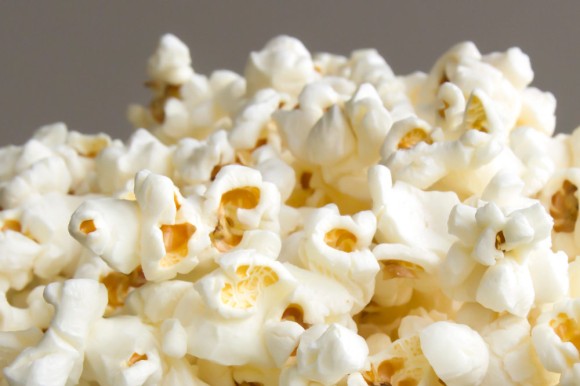 I can’t say I have a hard time finding nut allergy–friendly popcorn. As I’ve recently explained, I’m decidedly not of the call-every-company-about-every-product school, and most bagged popcorns I’ve found are indeed advisory label–free. Usually, then, I’m good—which means there’s no apparent reason for me to be posting about SkinnyPop. I haven’t found anything unusual, nor anything game-changing—but this stuff is made in a nut-free facility, and I happen to be addicted to it, so. Here we go.

Before I get into anything else—and believe me, I have a lot of stupid shit to get into—I should probably go through allergens, etc. So: All of SkinnyPop’s products (popped popcorn, microwave popcorn, and popcorn cakes) are free from nuts, peanuts, dairy, soy, egg, and gluten. It’s all vegan, non-GMO, and kosher, and it’s free from preservatives, etc., too. SkinnyPop’s marketing really tries to play it off as healthy—it’s called SkinnyPop, after all—but as you probably already know if you’ve spent any time on this blog, that has approximately nothing to do with why I’m here, writing.

Anyway. It’s taken me just about 20 years of life on this planet to realize that I hate most bagged popcorns. If it isn’t too “buttery,” it’s usually offputtingly salty, and if it’s neither, it’s almost always way too bland. I know, I know: Get off your doughy ass and pop your own goddamn popcorn, you opinionated sluggard. I know! But popcorn is, to me, exclusively a no-effort snack. If I wanted to spend 10 minutes over the stove, I’d fry an egg or make some pasta. But I don’t. I want to go straight from the cabinet to the most-sunken corner of my couch, and then I want to spend the next 15 minutes shoveling that popcorn, handful by handful, into the gaping chasm that is my open mouth.

SkinnyPop’s original just happens to be the perfect popcorn for such shoveling. There’s no squicky “butter” flavor, nor any overabundance of salt. In fact, SkinnyPop’s net saltiness is just right, which is probably my favorite thing about the stuff. It’s a weird set-up, though. Most pieces are just a wee bit under-salted, but every few handfuls, you’ll get a perfect (read: over-salted) piece or two. If every piece were so “perfect,” SkinnyPop would fall to the terribly over-salty fate of the rest of the bagged popcorns. But the rarity of the salty bits makes those salty bits cherish-worthy, and that‘s what keeps me shoveling this stuff into my mouth. I can’t help but chase the salt.

Here, because I’m an intellectual who’s read approximately 40% of the Nicomachean Ethics (and who’s just declared a minor in philosophy—please clap), I’m compelled to go into a whole hokey-jokey thing about how SkinnyPop, with its modest saltiness that rests precisely at the mean between the relevant extremes of under- and over-salt, teaches a popcorn-related sort of temperance. (After all, you really don’t need to be excessive when you’ve got SkinnyPop modeling the perks of moderation. I’d know; I’ve tried adding salt…)

When I eat this stuff, I feel like I’m homing in on virtue. And I enjoy it—it being both the moderate salt and the performing of the virtuous act—so thoroughly that I’ve no choice but to conclude that I must really be virtuous. Right? (Yada yada yada. This whole Aristotle thing was actually how I’d planned to open this post, so consider yourself lucky that I’ve downgraded it to a self-conscious interlude.)

Thing is, the whole virtuous-act thing is totally negated by the fact that this popcorn is particularly suited for binge-eating, precisely because of its fixture at the mean between the relevant extremes. I can’t plow through a bag of salt-corn or keep myself chewing on the bland stuff; I need SkinnyPop’s consistent inconsistency to rope me in and keep me shoveling. And while I don’t want to want to binge-eat (uh, right), I certainly do want a popcorn that compels me to. And as I sit here—on that most-sunken couch cushion, where else?—trying not to pick too much at the popcorn I’m supposed to be photographing, I can say with confidence that SkinnyPop does just that.

[I realize, of course, that I’ve spent this whole post on just one of a total of fourteen SkinnyPop products. That’s because I’m somewhat of a popcorn purist, so I’ve never actually tried any of SkinnyPop’s more-colorful offerings. As for the popcorn cakes…they’re fine, I guess, if you’re into that sort of thing. They’re too similar to rice cakes for my liking, but there’s nothing wrong with them, really.]