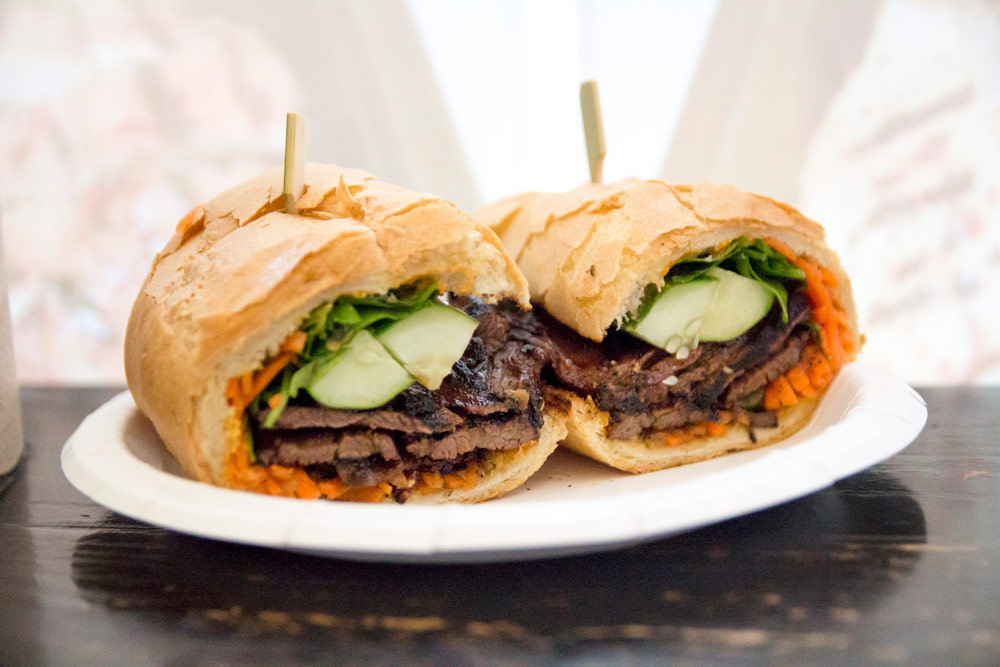 Bánh mì are tough. I don’t have any trouble finding tree nut–free Vietnamese restaurants, but Vietnamese restaurants that happen to use allergy-friendly bread? For a while there, I’d given up on finding any more. Sao Mai is a singular godsend—I don’t know how they ended up using the bread they use, but I’m so very glad they did, as every other Vietnamese restaurant I’ve called has either told me that they don’t know where they get their bread (oh), or that yeah, no, it’s just not going to work. I made the decision, then, to be content with Sao Mai, and my eye hasn’t wandered since.

And then I stumbled upon Saiguette, a surprisingly allergy-aware grab-and-go Vietnamese restaurant, way up on the corner of West 106th Street, whose menu proudly bares those rare, magic words: “…on our homemade bread.” Though peanut-heavy, that menu is entirely nut-free—and yes, the bread is made in-house, and it is, in fact, safe. Naturally, I found myself at Saiguette’s teeny-tiny, hardly-a-restaurant storefront within an hour of finding out the above. I’ve since tried 7 of the 11 sandwiches on the menu. Go figure. 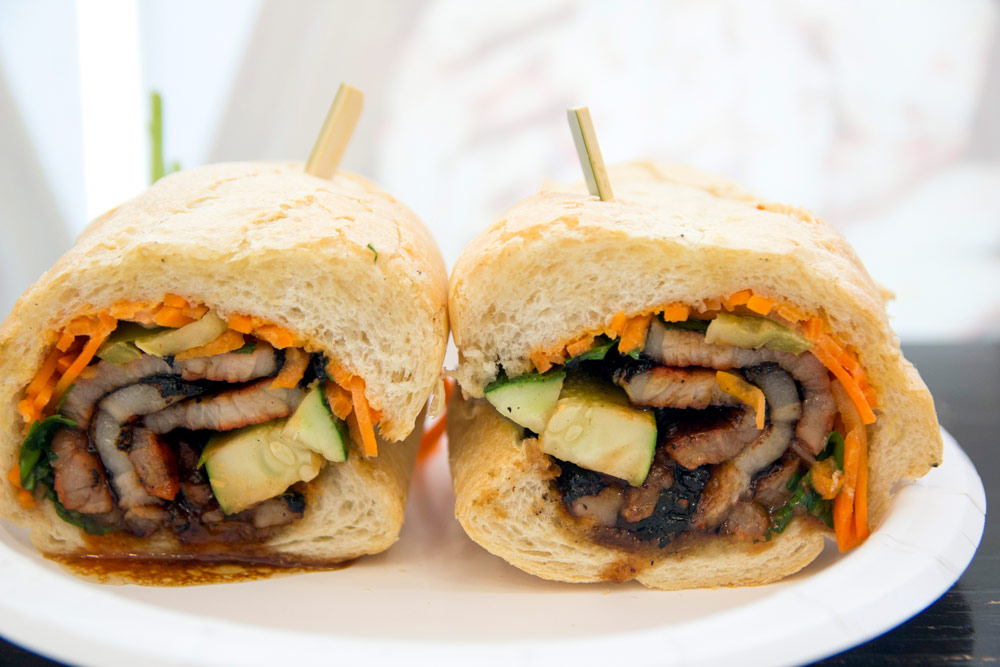 Now. Because I often lament how infrequently I get to rank things, I’m going to take this opportunity to do some sandwich-ranking. (I swear this isn’t just a clunky setup; I really do wish I had more opportunities to order items from best to worst.) The last things I ranked were the characters of Malcolm in the Middle (Lois > Dewey > Francis & Piama > Hal > Malcolm > Jamie > Reese—yes, I’m certain, and no, I won’t reconsider), but that was months ago, and no one cared, so. Saiguette’s pork belly bánh mì is the best one I’ve tried, followed by the grilled pork shoulder with lemongrass, followed by the classic (pâté and pork terrine), then the flank steak, then the grilled pork shoulder without lemongrass, then the skirt steak, then the chicken thigh. That’s my story, and I’m sticking to it.

But these sandwiches are hard to rank. Most differ only in their proteins—so because they share so many components, they’re probably best evaluated in the aggregate. Overall, then, they’re rather good. (Likely not the city’s best, but perhaps the city’s safest, and that counts for a lot.) The bread, though nothing special, is passable—better when not slathered in spicy mayo, a.k.a. the world’s most boring condiment—and the vegetables (and technical fruits) are surely good enough, despite the fact that they’re not exactly the sorts I’d want to eat outside the rather forgiving confines of a sandwich. Plenty of cilantro; a giant, satisfying wedge (or two!) of snappy, snappy cucumber; flavorful jalapeños; and just the right amount of pickled carrot… 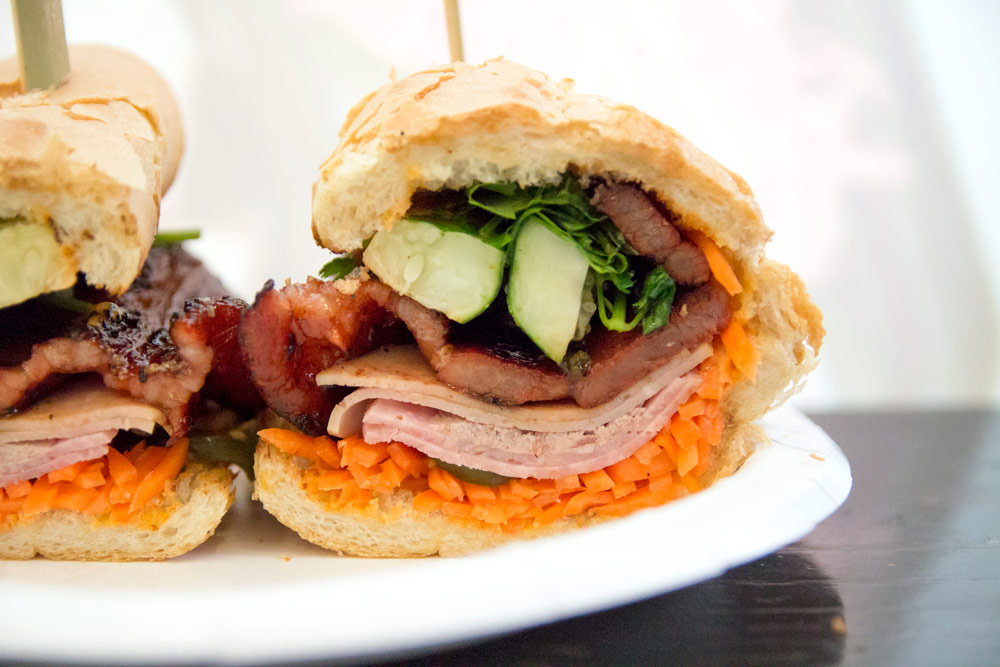 They’re good. All of them—which I suppose means it’s time for me to get into the details. So. The pork belly (pictured second above) is absurdly juicy, to the extent that it sort of just continuously oozes itself. It’s sweet—too sweet—but somehow still balanced, and if you don’t make the mistake of turning to another of Saiguette’s bánh mì within minutes of putting (half of) this one down, the fact that it never fails to blow out your palate will be a total non-issue. And the two pork shoulders—one grilled, with lemongrass, and one roasted, without—are almost as good. Both are rather sweet, but I find the grilled version significantly less overbearing. And though the added lemongrass doesn’t do much, I get a kick out of knowing it’s there.

Then, the flank steak—which is better than the skirt steak (top of this post), and by a large margin, too. These two are all about their textures, and given that, it’s a no-brainer to place the tender, juicy flank steak ahead of the tougher, drier skirt. But I think the classic (immediately above) is a little better than the both of them. Piled high with pork terrine and a few chunks of what tastes like (but isn’t) a takeout-style Chinese spare rib, that sandwich is pretty goddamn great. And it’s the cheapest one on Saiguette’s menu, too. It’s not perfect—without a doubt, it could use a little more balance, a little more nuance—but I do like it, and I do recommend giving it a try. 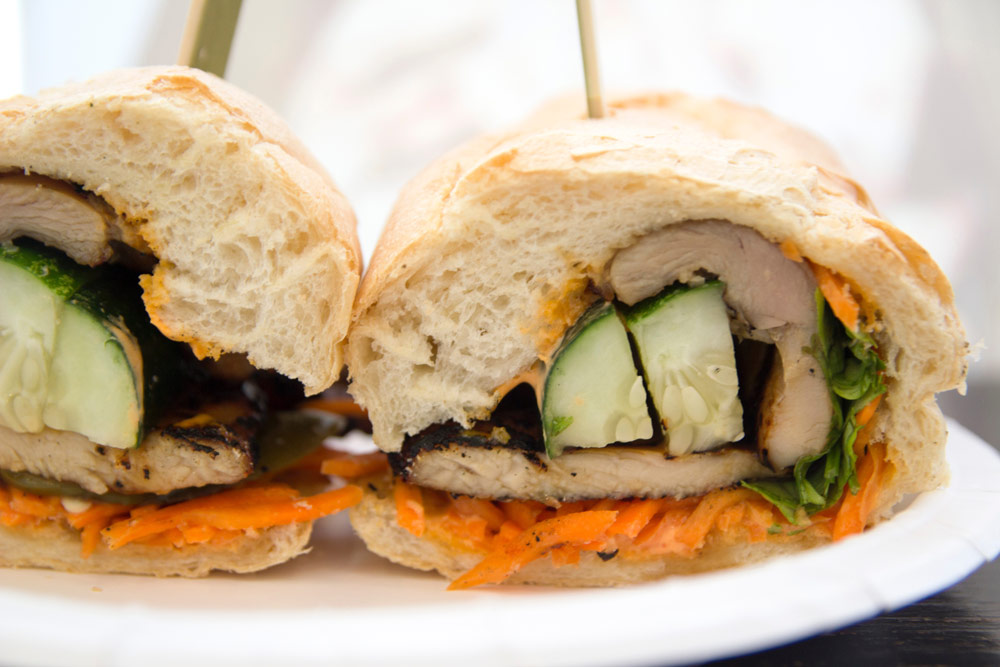 In fact, the only of Saiguette’s bánh mì I wouldn’t recommend is the grilled chicken thigh (immediately above), which is labeled “juicy,” but which actually sits at a rather unimpressive position on the juice scale, all told. It’s fine, I guess. But flavor-wise, it’s painfully boring—and a painfully boring central feature makes for a blunt, unbalanced, and all around underwhelming bánh mì. It’s no matter, though; there are obviously a bunch of other things to order.

But I do stick to the bánh mì. There’s nothing all that wrong with the phở, but I find it hard to justify going all the way the fuck up to 106th Street only to order a dish that just makes me go, “huh, that was all right—but I prefer Sao Mai’s.” By the time I’m stepping over Saiguette’s threshold, I feel as if I’ve earned something grand. (It’s all that time on the C train. I usually have earned something grand.) And as soon as I start feeling all earny-entitley, ho-hum phở becomes a total non-option. It just isn’t worth it—especially when there are nut-free sandwiches on the menu.

Besides, even if you’ve ordered it to-stay, Saiguette’s phở comes disassembled, which has some serious downsides. The flavors get less time to mingle, for one—and the noodles, which are just okay, get less time to loosen up and fall out of their noodle-glob. But the broth is excellent. It has depth and breadth and areas of interest and probably an interesting life story or two to tell, and there’s a ton of it, which definitely helps. The eye-of-round hardly has any flavor of its own, and the brisket, though rather tasty, comes with a few too many bits of gelatinous flab. But the broth is good enough to carry the phở—not to any sort of distinguished status, but to the status of a decent dish nonetheless.

But it’s all right. Those bánh mì deserve my focus anyway. They just about demand it.

Find Saiguette at 935 Columbus Avenue, on the corner of 106th Street. (By the way: If you call ahead and place your order for pickup, they’ll give you 10% off—and if you happen to be dining between 11am and 5pm, you’ll save 10% more.)