[Edit: Taquitoria is no longer in business. Blame the rent.]

One of the first places I ever went on my own as a kid—well, other than school—was the 7-Eleven a few blocks from my childhood apartment. Not one for variation, I’d buy the same thing every time: one (1) pre-paid RuneScape membership card, one (1) bag of Rips, and three (3) gross little taquitos. Admittedly, those taquitos always tasted exactly like they’d just come off a hot-dog warmer at some godforsaken gas-station convenience store—and they had, of course—but I didn’t care. That was just…what I did.

Maybe that’s why I hate taquitos so much. I mean, if I’d grown up on 7-Eleven hot dogs, I’d probably hate hot dogs, too. There are good hot dogs out there, though—I’m already well-aware of that. But good taquitos? I’m not so sure. I wasn’t sure pre-Taquitoria, and I’m certainly not sure post-Taquitoria. At the very least, though, these taquitos are worlds better than 7-Eleven’s—though this place doesn’t sell RuneScape membership. Definitely a downside. (Listen: I’ve quit, okay?) 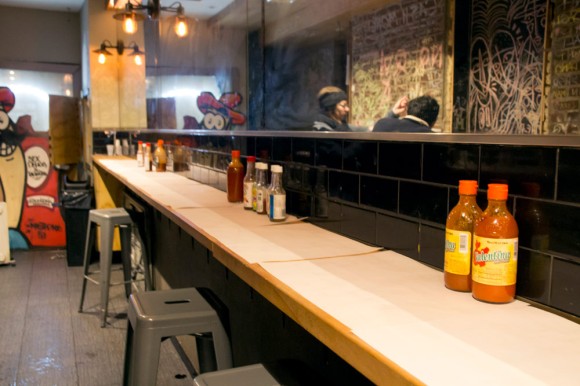 I found out about this place a long time ago—almost a year ago, actually, right around when I first started this blog—and back then, I was pretty excited about it. Why? Because—as if single-item-menu restaurants weren’t themselves enough of a boon for those with food allergies—Taquitoria’s menu proudly declares the restaurant nut-free (and gluten-free, and soy-free, and shellfish-free, too).

Now, for me to categorize a restaurant as “truly nut-free,” that restaurant must either (a) openly identify itself as nut-free, or (b) attempt to use only ingredients that are free from cross-contamination—and as I said, Taquitoria meets the first criterion, so I’ve gone ahead and categorized them as “truly nut-free.” Still, they do not require allergen statements from their vendors, so there is, I suppose, a chance that some of their ingredients may have come from facilities that do handle nuts.

…Then again, that’s true of almost every single restaurant ever, and there’s a chance of a nut trace in pretty much every dish on the planet, regardless of whether there are any nuts present in the kitchen it was made in. (If you’re eating in a restaurant, it’s just not feasible to insist on its being confirmed for you that every single ingredient in every dish you order is free from all possible nut traces. Think about it: flours, sauces, seasonings…it’s unlikely that everything will have come from a nut-free facility.)

Eating out is always going to involve some degree of uncertainty. It’s a risk–reward thing. And I happen to believe that Taquitoria’s about as safe as these sorts of places come. Let’s move on.

Despite all the good things I’d read about Taquitoria, and despite my initial excitement at its being nut-free, it took me a while to get myself over to Ludlow Street. My excitement, I think, was purely theoretical. And it wasn’t exactly easy for me to work up a motivated craving for taquitos and taquitos alone. A year later, I’ve still only been by twice—but I’ve ordered from them a handful of times, and I’ve tried pretty much everything on the teeny-tiny menu, too. Finally, I’m ready to blog.

And you know, I’m ready to be honest, too. So here goes: I don’t like much of anything about this place. Everything about it—its “graffitied” walls, its oldish-but-not-old-school hip-hop music, its been-done dueling Biggie and Tupac tip jars, its gimmicky single-concept menu, and even its ever-so-Chill™ business hours—screams “I’m not like a regular restaurant. I’m a cool restaurant.” And it drives me fucking bonkers. Admittedly, that’s a little weird; classic Kanye, gimmicky food, and late-night hours are all usually right up my alley. But when Taquitoria does cool, it just…doesn’t strike me as cool. Think of a fedora (or is it a trilby? I can never tell): it’s cool when Justin Timberlake rocks one, but some random (less-cool) dude? Not so much.

Between Timberlake and the random trilby-sporting guy guy, the difference is…well, a whole lot of things. But between Taquitoria and any of its less-eye-roll-inducing kin? The difference is just the quality of the food. I don’t think Taquitoria would have any trouble pulling off its attempt at cool if the taquitos were good. And don’t get me wrong—they’re all right. (They’re certainly the best taquitos I’ve ever had. But they’re also the only taquitos I’ve ever had that didn’t come out of either a 7-Eleven or a José Olé box.) They’re nice and crispy, with some formidable fillings—all three meats (chicken, pork, beef) are wonderfully juicy—but the toppings they come with are just so ridiculously underwhelming that they’ve soured me on the whole restaurant.

As for those toppings, there are three pre-set options—Classic (“guac sauce,” shredded lettuce, cotija—which is the style option pictured throughout this post), Cheesy (nacho cheese, sour cream, pickled jalapeño relish), and Chronic (a combination of Classic and Cheesy)—and not one of them is good. Where do I start? The guac sauce is watery and lame, and the shredded lettuce is McDonald’s-tier. The nacho cheese is inexcusable (I firmly believe that nacho cheese has no place in this world), and the jalapeño relish might as well not be there. Oh, and there’s never enough sour cream on them—and the red sauce  is totally useless.

In short, these taquitos leave a whole lot to be desired. They’re okay, but they’re definitely not good.

And anyway, how hard could it really be to improve these toppings? As long as they’re covered with some respectable sauce, cheese, and veggies—and as long as they’re properly fried, which these are—bland-ish taquitos would be a non-issue. But covered with this nonsense, any taquito would fall flat. And there’s no excuse for these toppings, either. There are so many appropriate options out there: a better avocado salsa, a reasonable amount of crema, some pico de gallo, a little onion and cilantro, even just a little lime…but no. The folks at Taquitoria have chosen to limit themselves to the likes of nacho cheese and shredded iceberg. Great. Thanks, guys.

As if it even matters, the sides are lame, too. The rice & beans—which are topped with tortilla chips (???)—are boring, even for rice and beans. And the chips & salsa are mediocre, too. The Chronic Fries—waffle, crinkle, and shoestring fries, mixed together and topped with all the nonsense I shit-talked above—somehow manage to be at once both boring and overzealous, and the same applies to the “nachos,” too.

Are you getting my point yet…? Anything topped with Taquitoria’s signature slew of accoutrements is going to suck, whether or not you decide to drown the creation in hot sauce. And for what it’s worth—probably nothing—this isn’t a matter of my having highfalutin tastes. I eat at McDonald’s at least twice a week, and if there were a Burger King nearby, I’d be there even more. I have a perverse love for KFC’s mashed potatoes. I sprinkle a little MSG on all my frozen meals, and I dump at least four pounds of French’s atop all my Hamburger Helper.

It may come as a bit of a surprise, then, given how critical I am of a lot of the restaurants I write about—but at my core, I have no standards. And Taquitoria still manages to let me down, not because their food is intolerable, but because it’s marketed as something it isn’t: notably better than the likes of mass-produced fast food. And maybe it is, but not by much. So I’m sorry, I guess, but I’m not a fan. The guys behind the counter are nice, though. I’ll give them that.

Find Taquitoria at 168 Ludlow Street, between Stanton and Houston.