Leave a comment
Mexican, Places to eat, Technically not nut-free 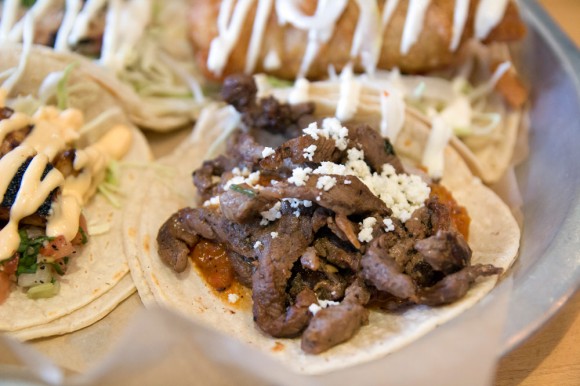 Here’s a hot take: Because they’re such a flexible, malleable, all-purpose food, tacos are the ideal lunch option. Lunchtime is unpredictable, and when I’m sitting in my morning class, paying full attention and definitely not idly wondering what’s for lunch, there’s not all that much I can know in advance. I don’t know how hungry I’ll be come lunchtime, nor do I know what sorts of flavors I’ll be in the mood for. All I know is that my class will end, and I will leave, and then I’ll be on the sidewalk, seconds tick-tick-ticking away as I scramble to figure out where the fuck to go before I run out of time and have to resign myself to, like, on-campus Chick-fil-A.

With tacos on the agenda, though, the Problem of Lunchtime Unpredictability sort of just evaporates, because like the Room of Requirement, the taco has this magical ability to become whatever it is I need most. A light lunch? One taco, maybe two, and probably a Coke, since I so little self-control. If I’m starving, though, it’s easy enough to scale up: add another taco or two, some chips, some guac—still an appropriate portion, still a reasonable price, still a meal I’m not ashamed to order.

Plus, even your lamest taquerias offer a handful of options for proteins, garnishes, and salsas, so it doesn’t exactly matter what sort of thing I end up wanting. Chunks of steak? Slow-cooked pork? Grilled shrimp? Beer batter? By the time I’m ordering, I’m generally hungry enough to make some choices—and then I get to weigh in on salsa, on crema, on guacamole. It’s all there, and it’s all being offered to me, and if I’d rather not decide, I don’t even have to. Tacos are small, after all. Why not get one of each? (And yes, I do realize that this theory I’ve just spent 300 words explaining is nothing more than a system I’ve crafted to enable my own indecisiveness. Leave me alone.) 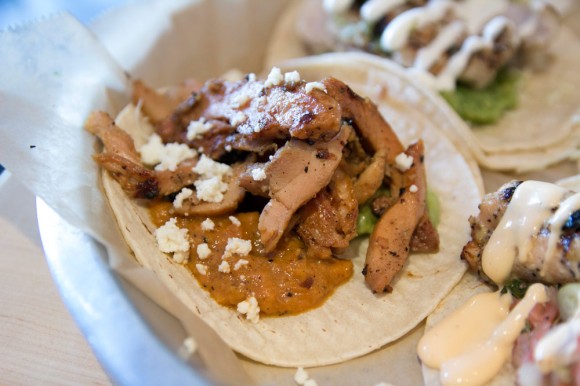 That said, the taquerias I’ve found within a mile or so of NYU just aren’t doing it for me. There’s Taqueria Diana, home of some tacos that are so lame, so boring that they actually threaten to put me to sleep. And then there’s Otto’s, whose wet and drippy one-note tacos I think I might’ve outgrown. Los Tacos and Los Mariscos continue to spoil me, but Chelsea Market’s just too far away to make my lunchtime list. And Chipotle‘s an option, I suppose, but even pre-shark-jump, their tacos were hardly passable as such.

For the most part, then, I’ve gone without. Which means I’ve had to make a hell of a lot of decisions.

All this to say that I was excited to find Dorado, a Baja-style taqueria—with no nuts in the kitchen!—that’s only a few blocks from NYU. To tell you the truth, though, my initial hopes weren’t all that high. Those Chelsea Market tacos really have cursed me, and because of them, I’m stuck with this ridiculously high standard that keeps me from enjoying myself at most other taquerias. I like Los Tacos, and I like Los Mariscos, and I like Taco Mix, up on 116th Street. That’s about it—and most days, that’s plenty. But I desperately wanted more lunch tacos. Travel-free tacos. So even with my hopes low, I was eager to give Dorado a try.

I don’t regret it. Dorado’s nowhere near as good as any of those taquerias I just mentioned, but it’s not terrible, either, and it’ll certainly do the trick when school resumes and I resume salivating at my midday taco bell. They offer eight sorts of tacos, seven sorts of quesadillas, and a number of salads, soups, and sides, too. And if that’s not enough variation for you—because it isn’t always enough for me—there are usually a few daily specials, too.

Anyway. I don’t love the grilled-steak taco (pictured at the top of this post), nor am I the biggest fan of the grilled-chicken taco (second above), but I’ll eat the latter, at least. Both are topped with queso fresco (which I like) and guacamole (which I love), but both are made with an underwhelming, heatless habanero salsa that doesn’t appear to serve any purpose beyond making me acutely aware of just how important a decent salsa really is. The steak’s too dry, too flavorless, too boring. But the chicken’s moist, juicy, and tender, and it has a nice, smoky flavor to it, too. 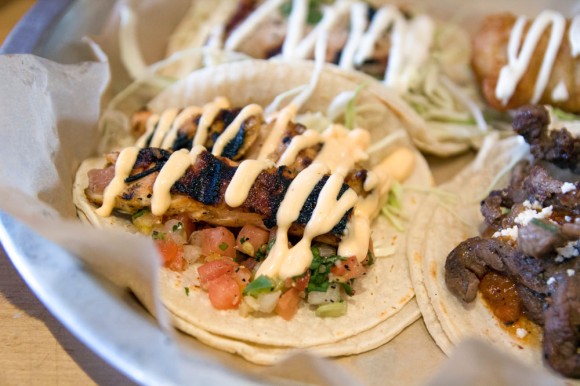 On the other hand, I do actively dislike the Baja original. Made with beer-battered whitefish, cabbage, crema, pickled onions, and Dorado’s own salsa fresca, it’s incredibly similar to the fish tacos at Los Mariscos. I have no gripes with that similarity—that’s what a Baja-style fish taco is, after all—but given what I know a Los Mariscos fish taco tastes like, I just can’t get on board with Dorado’s version. In every way, it’s just slightly worse: the batter’s soggier, heavier; the fish itself is less flavorful; the cabbage doesn’t make as much of a textural contribution; the salsa keeps to itself, hangs in the corner. As a whole, the taco is disjointed—and it’s heavy, and it’s unsatisfying, and I refuse to eat it. Same goes for the shrimp taco. But perhaps I’d feel differently if I’d never eaten at Los Mariscos.

What do I like, then? Of the tacos, only two: the grilled fish (third above), and the salmon (immediately above). Both the mahi-mahi and the salmon have just the right amount of fishy flavor to them, and both are rather creamy, too (which is a must-have quality of grilled fish, if you ask me). But on the whole, these tacos are average, at best. They, too, come off as disjointed pile-highs (piles-high?) of components, rather than as cohesive, unified, respectable wholes—but their fish bases makes them rewarding enough, I think. Some days.

I really ought to mention, though, that I absolutely adore Dorado’s chips. They’re unusually hearty (read: thick, but also hearty), and they come dusted with the perfect amount of salt, which is surprisingly rare in the world of homemade chips. Truthfully, they’re the highlight of each and every one of my Dorado meals. The elote’s missing something—I think that something is halfway decent corn—and the rice and beans are rather ho-hum, as far as I’m concerned, but those chips, man. Good on their own, and good dipped in both the guacamole and the particularly onion-heavy salsa fresca they’re served with, those chips are one worthwhile side.

So. It’s not as if Dorado will ever become one of my favorite restaurants. The tacos are just too mediocre—and in the time I’ve spent on this post, I’ve decided that their mediocrity has nothing to do with that high standard for tacos that I mentioned above. Dorado’s food is mediocre because it’s mediocre, plain and simple. My standards and I have only one role in that mediocrity: we took notice. And so the search continues. Though I’ll probably continue to frequent Dorado in the meantime.

Find it at 28 East 12th Street, between University and 5th.