I grew up haunted by the image of Mario Batali. My mom had a bunch of his cookbooks, all plastered with his image, which gave him—shorts, vest, orange Crocs, and all—quite the presence in our kitchen. My babysitter, who watched only local news and the Food Network, loved to watch him (and just about every other celebrity chef) on TV. And I, for my part, had my family touring the same high school as one of Batali’s sons, which was how my dad ended up badmouthing Batali’s “look” a mere two feet from a woman who turned out, yes, to be Batali’s wife.

Still, I never thought to look into any of his restaurants—until I stumbled upon this post from 2015, which suggests (nay, states outright) that OTTO is rather allergy-aware. Naturally, I sent the restaurant an email. Here’s the meat of the response I received:

There are pinenuts in our Eggplant Caponatina and in our Olive Oil Coppetta (which has a pignoli brittle but can easily be made without that topping). They are also sprinkled on top of our Caprese salad but that can also easily be made without the nuts. We serve walnuts in our Fregola & Stinging Nettle Pesto. We serve almonds in our Escarole & Sunchoke salad but the nuts can be removed from that dish as well. We are very practiced at dealing with allergies and take every precaution to avoid any cross-contamination so the foods that are prepared without nuts (which is the majority of the menu) are completely safe for those with nut allergies.

What an answer. Usually, positive responses take the form of a “yes, you’ll be fine here,” without any information about of whether or how the kitchen handles nuts. But this woman listed every dish I ought to watch out for, and she took a stab at explaining why the rest of the menu ought to be fine for me, too. Sure, “every precaution” is typical vaguebabble; but as a whole, her response was incredibly promising, both for its level of detail and its use of the sort of absolute language (e.g. “completely safe”) most restaurant personnel tend to shy away from. Usually, restaurants refuse to make guarantees, however informal. So when one does—especially in writing—it usually means that the staff is pretty confident in their ability to prevent cross-contamination. So I went ahead and booked a table. 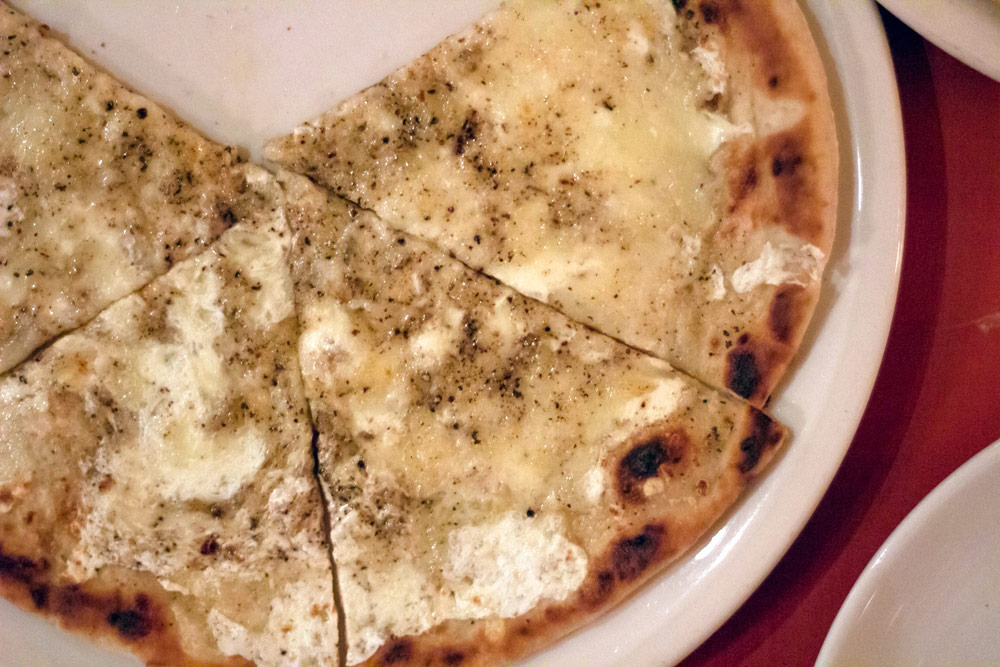 As for the restaurant itself, it’s a dark one, decorated only in the tones of sauce: reds, browns, and red-browns (in other words, there was nothing I could do about the way these photos were doomed to come out). It’s also enormous, and nearly always packed to the brim, and so nearly always astonishingly loud. On a bad night, it’s club-loud, with shrill voices yowling, screeching, shrieking to be heard over booming laughter, clinking glasses, and tables of wine-drunk 30-somethings who can’t seem to stop hooting, clapping, or—I swear this happened, and under 24 hours ago—chanting “drink, drink, drink!” (I’m not being a curmudgeon. I’m 21 years old. I like the loud and the lively. I’m one of the loud and the lively. But the back half of OTTO is, on occasion, exceedingly raucous.)

On a good night, you’ll luck into a table toward the front of the house, where OTTO seems to seat the majority of its don’t-need-to-be-banned-from-public-dining customers. Those nights, you’ll be able to get away with a half-yell—but it’s still too goddamn loud in there, no way around it. Fortunately, though, the food’s pretty good, and the prices are relatively low, and—oh, yeah—the servers know their allergens, and they don’t give me any flak when I ask them to double-check on the safety of my order. So half-yell I do. It’s a small price to pay.

Of the pasta dishes, I can’t really say I have a favorite. They’re different from one another, sure, but no one in particular has been better than any of the others I’ve tried, and they’ve all sort of blurred together in my mind. But I suppose the ones I’ve liked best have been the (seasonal) summer-truffle pasta, the bucatini alla gricia, and the spaghetti alla carbonara (pictured at the top). Truffles are truffles; it’s not as if they call for much evaluation. But I can say that the bucatini alla gricia, made with the most perfect guanciale, is particularly well-balanced, and that the carbonara—my go-to—is reliably good. Plus, it involves scallions, the greatest of the onions. I won’t say more.

As for pizzas, there are almost 20 on the menu—and though I, boring, have only tried a few, I can say with confidence that that most (if not all) are worth an order. The Bianca—not really a pizza, but a flatbread dressed with olive oil and sea salt—is as tasty as it is boring (that is to say, very), and the Otto Lardo—the same thing, but with a few slices of lardo on top—is even better. Salty, oily dough is great, especially when it’s got a chew like OTTO’s; throw some funky lardo on top and it becomes something that feels like a real food, too.

Of course, OTTO does do actual pizzas as well. Of those, I’m most drawn to the Fennel & Bottarga (pictured immediately above), which is made with fennel, bottarga, tomato, pecorino, and mozzarella. Normally, I hate fennel, but I can actually tolerate this variety. Though I will say: There sure is a lot of it, and very, very little bottarga. Still, it’s a fine pie. The crust—always crisp, never burnt—is better than your average, and the sauce is just as it should be: present, and savory, and acidic, but not the slightest bit overbearing. None of that sickly-sweet shit.

Anyway. I really like OTTO—and I’d probably like it even more if I hadn’t discovered it within mere days of finding Osteria Morini, where the pastas are so ridiculously good that they actually manage to hurt my feeling. But OTTO, though it’s nothing incredible, is certainly good enough to hold its own, and I have enough sense in me to (try to) override my bias and acknowledge that. The food isn’t life-changing, but it does make me happy. And the noise is tolerable, I guess. If you’re ready for it. Sometimes. Maybe.

Find OTTO at 1 5th Avenue, between 8th and Washington Mews. (Really, though, it’s on 8th, between 5th and University.) But bring earplugs, or noise-cancelling headphones, or a gaggle of your finest LoudBros. Just don’t bring a date—or at least not a date you’d actually want to, you know, hear or be heard by. I bring my parents. They seem to like it.