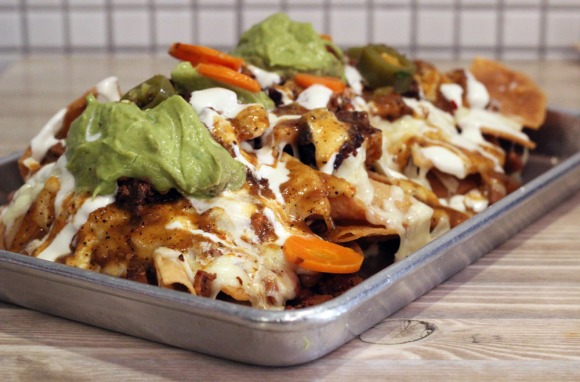 I know, I know. This blog is filled with posts about nut-free taquerias; how could I possibly have found another? Well, I actually have an answer: I found Taqueria Diana here, where I ended up after a Google search of “best nachos in NYC.” 30 minutes later—after I’d called and made sure the folks at Taqueria Diana don’t use any nuts in their kitchen—it was time to go.

I went pretty late in the day, and they were out of both carnitas and elote—which, to be honest, had me pretty disappointed—so I got a tray of nachos al pastor and Sam got a burrito (also al pastor). I tried his burrito, and…it was pretty bad. The filling was mostly rice and beans, and when Sam gave up on holding the burrito together and let its contents spill into onto his tray, I couldn’t deny how much what fell out reminded me of a cockroach infestation.

Unnecessarily mean comments aside, the burrito was undeniably mushy and bland, and I probably won’t ever eat another. The nachos, however, were a different animal entirely. (Not literally. Same meat.) For $12, it’s a huge portion—and it’s really good, too. Seriously: I can’t stop ordering them. It’s becoming a problem.

The chips (homemade!) are strong enough to hold the toppings: cheese, beans, guacamole, crema, salsa, jalapeños, carrots, salsa verde, and the meat of your choice. There’s plenty of cheese, always fully melted and well-distributed—and there’s a whole lot of guac, too, which I can’t help but appreciate. The salsa verde isn’t all that flavorful, but there are squirt-bottled salsas of various heat levels all over the restaurant, so the verde’s a non-issue, really. Even the beans are good (and I’m unashamedly anti-bean).

Best of all, these nachos are entirely free from that nasty-ass, movie-theater-tasting slop called “nacho cheese” that everyone and their mother seems to need to drizzle over tortilla chips. (Ugh. Ugh.) They’re missing pico de gallo, too—but I’m willing to accept that as long as nacho cheese stays out of the picture, too.

The pork itself—which is the one meat they never seem to run out of—is pretty dry and boring, but that’s my only real complaint. The earlier I go, the better the meat is—so perhaps it’d actually be good if I could manage to show up around lunchtime. (Or perhaps they won’t be out of carnitas. One can hope, right?) Meat aside, though, these nachos are pretty solid, and I’m grateful to have found them. 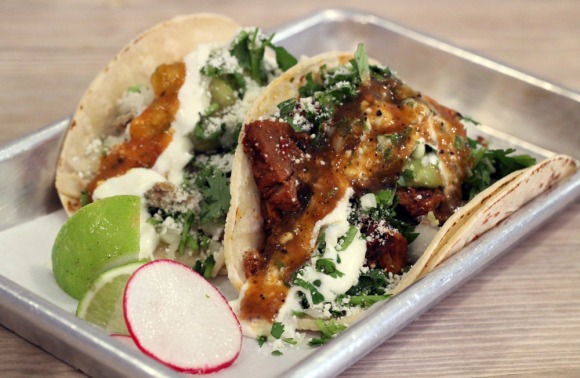 I’ve tried the tacos, too—al pastor and chicken, both pictured immediately above)—and while I prefer those at Los Tacos (and Otto’s, too, on a good day), these definitely aren’t bad. There’s plenty of crema to go around, and I’m a sucker for anything with a bunch of cilantro sprinkled on top, so it wasn’t all that hard for these to keep me chewing. Still, the tortillas were sort of shitty, and both meats fell totally flat. The al pastor was as described above, and the chicken was mushy-soft, in a tuna-fishy sort of way.

Via delivery—and only via delivery, because I can’t seem to ever get out the door before 3pm—I’ve actually been able to get my hands on both the carnitas and the elote. Though everything got a bit soggy in transport, I can still say that I liked the carnitas a whole lot better than the al pastor. On the other hand, the elote fell a bit flat. It had way too much mayo and not nearly enough cheese, and the corn itself was pretty bland—though perhaps it would’ve been better if it hadn’t just traveled a few miles in a tin foil cocoon.

Anyway. I’ve done a fair amount of complaining in this post, but I do like Taqueria Diana. The tacos are good, the nachos are great, and the elote’s all right, I suppose, though it’s not as if I’ll ever crave it. Maybe one day I’ll be able to get my hands on their carnitas in-store—or maybe not. Either way, I’ll probably continue to eat at Taqueria Diana. That’s kind of just what I do.