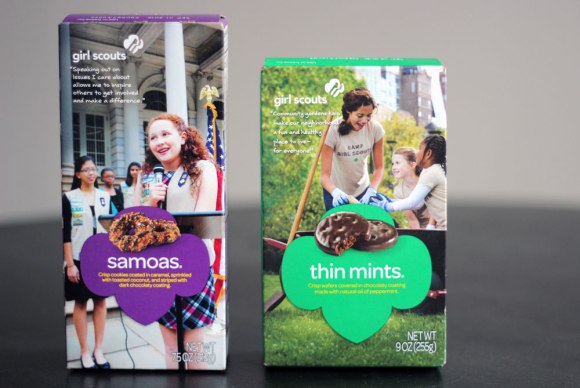 The other day, I took an adventure on the Long Island Railroad and happened upon a Walmart, outside of which a table of Girl Scouts (well, Girl Scouts’ mothers) were selling box after box of cookies. Unable to help myself, I bought some Thin Mints and continued on my way—happily, until about 30 seconds later, when I began to regret not getting a box of Samoas, too. But this is prime Girl Scout Cookie season, and I was in the middle of a strip mall on Long Island,so it was only about 20 minutes until I came across another table of cookie-selling Scouts, this time at the entrance to Roosevelt Field Mall.

Girl Scout Cookies are manufactured by two different companies, so the allergen information I’m about to recap is two-fold. The cookies I bought were made by Little Brownie Bakers, so I’ll go over them first. According to their FAQ:

If the allergen in concern is not listed below the ingredient statement, we are confident that the product is safe for consumption. Please trust the labeling. We do use a may contain statement for peanuts and tree nuts when the product is produced on a line that shares equipment with another product that does contain peanuts or tree nuts.

Some of their cookies contain peanuts, but none contain (or may contain) any sort of tree nuts—with the except of the Savannah Smiles, which come with a “may contain” warning (and which should thus pose very little risk of cross-contamination). Ingredient information for individual cookies can be found here.

The situation at ABC Bakers is similar. According to their FAQ, they’re a very allergy-aware company, and they employ the following practices to reduce the risk of cross-contamination:

In addition, we call out all allergens on our packaging, order cards and web site and provide specific warning if a product is made on a line that also produces product with a common allergen such as peanuts.

The allergen information for individual cookies can be found here. Again, a few cookies contain (or may contain) peanuts—but the only cookie with any sort of tree nut warning is the Trios. (And again, that’s a product that comes with a “may contain” warning, rather than one that actually contains nuts—so the risk of cross-contamination should be low indeed.) In general, both Little Brownie and ABC seem to be pretty trustworthy, with regard to allergens and labeling. (And I’ve never had any allergen-related issues with Girl Scout cookies, if you’re into meaningless anecdotal evidence.)

Anyway. Girl Scout Cookies are delicious—but I don’t need to convince anyone of that, because it’s pretty much common knowledge at this point. Sure, part of their appeal is due to the fact that they’re only available seasonally and are thus kept relatively scarce—but we all know that’s not the only reason everyone loves them so much. They’re just plain good. (Well, some of them are. I can’t vouch for anyone who claims to like Trefoils. But give me a box of Thin Mints and it’ll take me some serious self-control to stop myself from finishing both sleeves in one sitting.)

To find a table of cookie-clad Girl Scouts near you, refer to the Girl Scouts’ cookie locator—or spend a day wandering around shopping centers in Carle Place. Either way.