Dos Toros Taqueria (or, That Time I Was Really, Really Wrong)

All right. Let’s say you’re like me, and you’ve eaten at Chipotle too many times in the past month to count, and you’re starting to feel a little ashamed. You still want Chipotle, but shouldn’t you…you know, eat something else? The answer is yes. Yes, you obviously should eat something else. And Dos Toros is your key to doing so—but, you know, without ever having to actually eat anything else.

Dos Toros is remarkably similar to Chipotle, though die-hard fans of either will probably try to convince you that they’re, like, totally different, dude. But the fact remains: they’re both Mexican-ish fast-casual chains that offer customizable burritos (and bowls and tacos, too). And like Chipotle, Dos Toros is pretty much nut-free. According to their online menu: “There are zero nuts in anything at DT. There is however sesame oil in our smokey hot sauce and our salad dressing.”

With regard to potential cross contaminants, a Dos Toros representative told me the following via email: “I just talked to one of the founders and it’s probably not fair to say we ensure that there are no contaminants, but we assume something like onions or peppers is not being grown next to peanuts.” Some may not be satisfied with that answer, but it was enough for me, so to Dos Toros I went.

The first time I went (to the Union Square location, in late February), I ordered a carne asada burrito with rice, corn, cheese, and sour cream—and to be honest, I absolutely hated it. It was soggy and bland, with mushy rice and funky-tasting steak, and I promised myself I’d never return. Come summer, though, I read that a brand new Dos Toros location was having a a Friends and Family event—basically a free food day—in celebration of their June 13th grand opening. If I was ever going to give the place another chance, it had to be then.

Fast forward to Sunday, June 12th. The Dos Toros in question was the chain’s 11th restaurant, located at 52 West 52nd Street, between 5th and 6th. The Puerto Rican Day Parade was in full swing (and only half a block away, at that), and Dos Toros #11 was crowded. Like, snaking-line, no-tables crowded. No surprise there, I guess. There’s a lot of hype surrounding Dos Toros—and who doesn’t love discounted food?

I figured I should switch it up, so when my turn came, I ordered a carnitas burrito with rice, peppers and onions, tomato salsa, corn, verde sauce, guacamole, and sour cream—and, of course, some chips and guac (why not?). As promised, everything was free. And the employees were absurdly friendly. With my last Dos Toros experience still fresh in my mind, I was ready as ever to hate everything about the place—but I couldn’t. Everything was perfect. 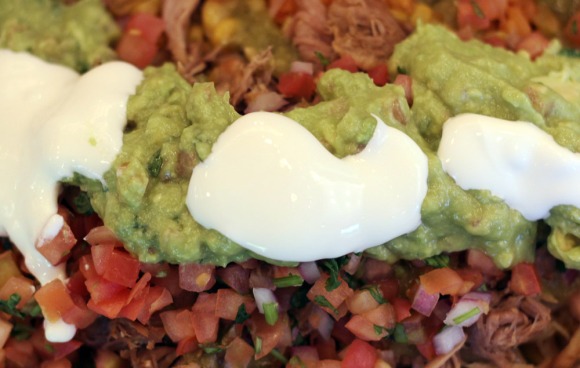 I’ll just say it: My burrito was better than anything I’ve ever eaten at Chipotle—including those meals I’ve eaten when Chipotle was at its peak, which it certainly is not anymore. (Have you tasted their steak lately? It’s pretty terrible these days.)

My burrito wasn’t bland. It wasn’t soggy. Nothing tasted funky. All the ingredients were fresh-as-could-be, and the burrito as a whole was flavorful and cohesive, without any of the mushy homogeneity of my first Dos Toros meal. Above all, it was good. Great, even. So: I’m sorry, Dos Toros. I misjudged you.

I maintain, though, that their rice sucks. (I’m sorry. Maybe I suck. But I just don’t like it.) It is mushy and bland—but it definitely isn’t as offensive as I’d originally thought. And while I liked the carnitas better than the carne asada, I must admit that both were pretty boring. But I remain convinced: Overall, Dos Toros is pretty damn good.

Perhaps my first burrito was only so bad because of my own poor choices, made in the interest of saving money and emulating my favorite Chipotle meals. Or perhaps my second burrito was only so good because it was opening week, and all the ingredients were extra fresh (and the employees extra motivated).

Either way, I look forward to finding out just where your average Dos Toros burrito lies on the spectrum between my first and second experiences. And I’ve certainly learned my lesson—there’ll be no more cheaping out on additional ingredients for me.

[Note: Pictured in the two photos above is not a Dos Toros burrito; it’s a carnitas plato that I ate a few days after writing this post. I’d been wanting to try something other than a burrito—and a plato was way easier to photograph, anyway—so I figured I might as well. Forgive me.]

2 thoughts on “Dos Toros Taqueria (or, That Time I Was Really, Really Wrong)”