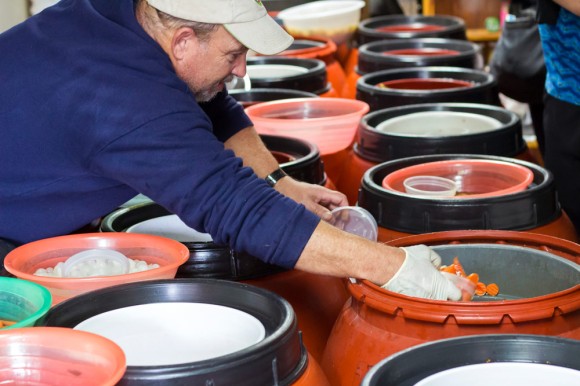 When I started eating at Katz’s—and believe me, I started—I stopped eating pickles. Theirs are beautiful, but I just can’t deny how bad they taste. Their new pickles are too bland and their full-sours are just too sour. I know, of course, that there are better pickles out there, but…I don’t know. The ones at Katz’s demoralized me, so I’ve been off pickles for a while now.

But whenever I walk over to Kossar’s I can’t help but gaze longingly at The Pickle Guys, a real-deal Lower East Side institution that sells—can you guess?—pickles, and lots of them. But cucumbers are not the only thing The Pickle Guys brine; they also do olives, tomatoes, pineapples, mangoes, beets, peppers, okra, string beans, garlic, turnips, and a whole bunch of other shit, too. (Plus, come Passover, the employees grab their gas masks and head out to the sidewalk to grind up absurd amounts of horseradish.) 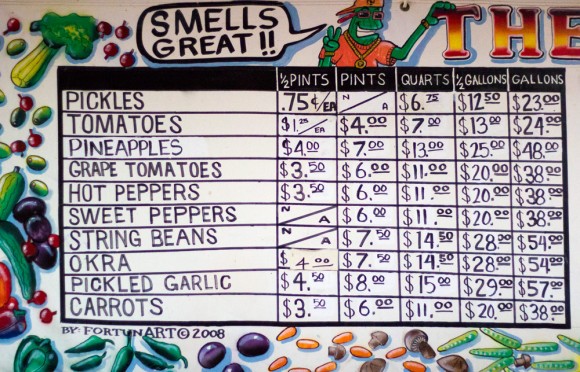 After walking by enough times (and after doing some Pickle Guys–related reading), I decided I couldn’t put it off any longer. I’d have to stop by, and soon. Before I sent them an email, asking whether they might have any nuts on-site. Within a day or two, I had my answer: “No we don’t use any tree nuts. We used to carry Almond Stuffed Olives but that was over 2 years ago.” Sweet. (Sour?…I’ll see myself out.)

Anyway, I stopped by on the first day of Sukkot, which meant the store would be closing at 4pm, rather than the usual 6pm. Despite that—or maybe because of it—there was a line out the door and a moderately large crowd of pickle-suckers beside it. (They were loud. The suckers, I mean. I think they were on one of those “food tours.” It was disconcerting.) 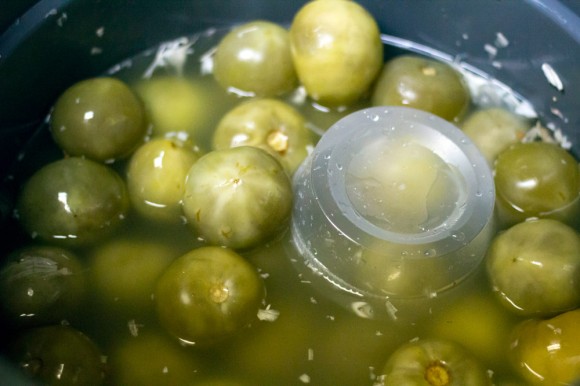 Inside, there is not a frill in sight. The bulk of the teeny-tiny space is occupied by big, red barrels, each holding a different kind of pickle. One wall’s exposed brick; the other, painted white, bears a menu, above which a single sentence is printed in all caps: “PLEASE KEEP HANDS OUT OF BARRELS.” Noted. There’s a slight breeze from a fan and a strong, strong smell of brine. Employees move quickly and take orders via shout, scooping pickles into plastic containers, pausing only to offer samples and to poke fun at customers.

The employees are obviously proud of their product, and the customers all seem to know that something good’s about to come their way, so no one seems much to mind all the chaos. Though the line was long, it moved quickly—so quickly that by the time our turn came, we hadn’t yet decided what to get. I decided to wing it, which resulted in my ending up with a whole bunch of shit: a new pickle, a full-sour, a half-sour, a quart of three-quarter-sours, some sweet gherkins, some Greek olives, a lot of grape tomatoes, and a particularly overstuffed quart of string beans.

Once we’d paid, Sam and I headed over to a nearby park bench for some sampling (and some photos that apparently couldn’t wait. Sorry).

First, we ate our singular pickles, beginning with the mildest. Here, from left to right, is a new pickle, a half-sour, and a full-sour:

Now, I’ve literally never enjoyed a new pickle. I have a rule: “fuck the flavor of cucumber.” But these are good. I think I like them so much because they aren’t just cucumber-y; they’re also just salty enough, just sour enough, just far enough from your average cucumber that they’ve actually been able to win me over. I think I like cucumbers now. And like the rest of The Pickle Guys’s pickles, these have a snap (and spray!) that’s straight-up absurd.

The string beans are nice and snappy, but thinner and more manageable than a regular pickle—nice—and the grape tomatoes are even better. Sam and I liked them so much that we ended up re-braving the line to get our hands on an additional pint (which was also when we picked up the pint—yes, pint—of three-quarter-sours).

Neither of us much enjoyed the sweet gherkins (too sweet!), nor were we able to find much use for the Greek olives (too salty!), so we ended up giving them away.

There are still approximately half a billion Pickle Guys products I want to try: pineapples, bread & butter pickles, tomatoes (both sliced and unsliced), and some other types of olives, to name a few. But it’ll be a while, because at the moment, my fridge is well over its pickle capacity.

In any case, if I haven’t yet made it clear enough: The Pickle Guys is a lovely store, and their pickles are legit.

Find them at 49 Essex Street, between Grand and Hester. They’re strictly kosher, though—so don’t even think of stopping by on the Sabbath.

2 thoughts on “The Pickle Guys”