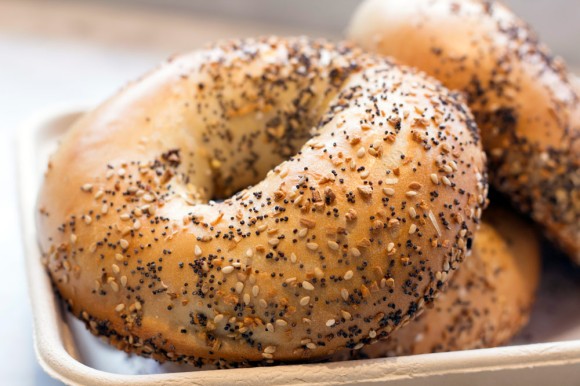 I have a huge thing for bagels, and I’ve spent a lot of time scouring this city for some that happen to be allergy-friendly. I’ve found a few, but none that are quite what I’m looking for when I’m craving a classic NYC bagel…that is, with the exception of those you’ll find at Kossar’s. These—these—are precisely the bagels of my dreams.

Before eating at Kossar’s, I spent a few days emailing back and forth with Evan Giniger, who has owned the store since 2013. Rather than trying to summarize, I’ll just paste the relevant bits below. (I’ve taken the liberty of splicing some emails together, but otherwise, what follows is exactly what I received.)

We do not use any nuts in the production of anything we make at the store. We do use seeds though, which you say below are fine.

Some of the packaged products like babka and cookies are made in an outside facility that does use nuts in other products.   While anything we sell does not have any nuts in them and all come in wrapped, we do sometimes sample them in the store, meaning technically would be possible for cross contamination to have occurred outside our store.

We do sell peanut butter and Nutella spreads in the store at the counter and it is possible that a knife might come in contact with one of those.

All of our spreads are prepared in house in a kitchen area that would also prepare things with sesame seeds, Nutella, and things like that.  I can not say for sure that there is no cross contamination and again if you are very sensitive or concerned at all I would avoid them.  We only have one set of knives we use for everything.

So my two answers are no, we do not use nuts in any of our products, but if you are highly allergic, I would advise that you do not take any risks and refrain from eating at our location.

So Kossar’s isn’t the most clear-cut of cases. But Giniger is refreshingly honest and allergy-aware—and the bagels themselves seem to be pretty low-risk, as they don’t (well, shouldn’t) come into contact with any nuts at any point in their production. So I am comfortable eating at Kossar’s…with some limitations. I’m not too bothered by the potential in-store samplings, but I am bothered by the nutty spreads. (The above emails mention only Nutella, but Kossar’s has almond butter, too.) So given the whole one-set-of-knives thing, I avoid not only the spreads, but the fish, etc., too.

That leaves only two options for the nut-allergic stubborn person/bagel-craver who wishes to eat at Kossar’s: unadulterated bagels and unadulterated bialys—which is sort of unfortunate, given how much other awesome shit they sell. But it’s fine, really, because their bagels, even plain, are seriously some of this city’s best. Finally, I’ve found them: nut-free bagels that don’t suck. (Take that, Thomas. Also, fuck you.)

A Kossar’s bagel is fluffy, dense, and chewy, just as a bagel should be. It doesn’t need toasting, nor does it need accoutrements (though they’re a welcome addition, no doubt). Inexplicably, it’ll be warm or warm-ish around 4 times out of 5, clock-hour be damned. The everything bagels are perfectly seasoned, with just enough salt to make them interesting—but I don’t mind an undressed plain bagel every now and then, either. (Not if it’s as good as those at Kossar’s, at least. If you think I’m going to eat an undressed plain bagel from Baz, you’ve got another think coming.)

When I get bored of undressed Kossar’s bagels, I’ll usually pick up some cream cheese (scallion, from nearby Baz) and dip my bagel(s) into it, like the baboon I really am. (Process pictured immediately above—except it usually takes place while on the move.)  And when I’m in the mood to pretend I don’t have food allergies, I’ll usually pick up some cream cheese and some lox, then take everything home and assemble it to my liking. Sure, it’d be nice to be able to let the folks at Kossar’s do all that for me—but it’s not so bad to have to do it on my own. (Nothing can upset me, really, when there are good bagels coming my way.)

By the way (and this should be more than a “by the way,” but whatever), the bialys, pictured in baskets above, are great, too. The onion ones are my favorite, but the others are good, too—and whichever I end up with, I like to take them home and toast them, patience permitting. They’re just so doughy, almost like an extra-thick, extra-chewy pizza crust. Honestly, they’re right around as good as the bagels. (And that’s a high compliment. Trust me.)

Anyway, I’m absolutely in love with Kossar’s, even though I can’t eat, like, 98% of the things they sell. The bagels are easily good enough to keep me coming back, despite the fact that there literally isn’t a train that’ll take me from my neighborhood to anywhere near Kossar’s. It’s a 30-minute walk—but there’s nothing that can keep me away.

Find Kossar’s at 367 Grand Street, between Essex and Clinton.

One thought on “Kossar’s Bagels & Bialys”