Leave a comment
By Juliet Chinese, Places to eat, Technically not nut-free 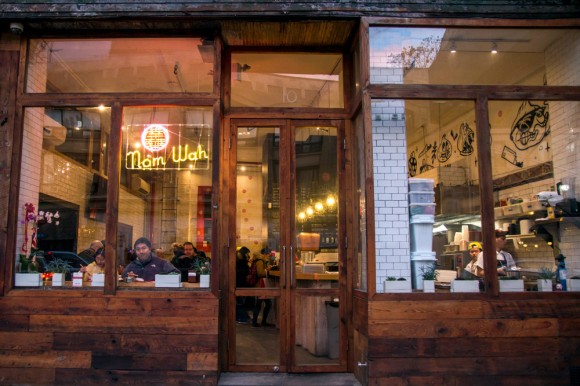 A few days ago, I published a post on Nom Wah Tea Parlor, one of the only nut-free Chinese restaurants I’ve ever found. This time around, I’ll be writing about Nom Wah Nolita, Nom Wah’s brand-new fast-casual spot in (guess where?) Nolita.

Now, Nom Wah Tea Parlor has been around since 1920. (It’s said to be Manhattan’s first dim sum restaurant.) Nom Wah Nolita opened three months ago—and even the fast-casual concept they espouse has only been a thing in the US since, like, the 1990s. You get it—Tea Parlor, old; Nolita, new. And it shows.

Nom Wah Nolita is incredibly hip and modern. It’s like you took the Tea Parlor and cross-bred it with a Crif Dogs–type place—and then stripped the offspring of any remaining traces of its Chinatown roots. Its all metal and hard-wood, with a few bright-white walls, one featuring a bunch of graffiti-esque drawings of, um, anthropomorphic dumplings. You order via iPad (which is sort of annoying, actually—they’re a little glitchy), and you’ll be in and out in no more than 20 minutes.

Honestly, Nom Wah Nolita is what the Tea Parlor would’ve become, had its renovations gone terribly, terribly wrong. But since Nom Wah Nolita isn’t the Tea Parlor—since it’s a separate restaurant that should be evaluated on its own merit—this isn’t a tragedy. A 1920s dim sum spot becoming a hyper-modern bastion of “new Chinese food”? Unacceptable. Its counter-service offshoot blaring some hip hop every now and then? Totally acceptable…as long as the food’s good.

Unlike the good ol’ Tea Parlor, Nom Wah Nolita is not peanut-free, but there aren’t any tree nuts on-site, so I’m entirely comfortable eating there. As always, I called ahead, and the guy who answered the phone—who also happened to be allergic to tree nuts!—told me I’d be “good to go” (i.e. that I’d have no reason to fear cross-contamination at Nom Wah Nolita, because there are no nuts or nut products anywhere in the kitchen). Reassurance from someone with allergies like mine is all I need and way more, so the first time I went, I actually wasn’t worried at all.

That first time, I tried a whole bunch of different things: the steamed ribs with char siu glaze, the scallion pancakes, the vegetable fried rice, and—how could I not?—the soup dumplings. And though no particular dish was mind-alteringly incredible, I thoroughly enjoyed my meal. The ribs were so unprecedentedly tender that I was able to forgive them for their too-sweet glaze, and the scallion pancakes, though a little bland, had the perfect texture. The fried rice was also on the bland side, but it wasn’t bad in the slightest—and there were crunchy bits of something or other on top that managed to make the dish worthwhile.

And then came the soup dumplings. (As the iPad will warn you, soup dumplings take longer than everything else to cook, so you’ll probably have finished the rest of your food by the time you end up with any.) They taste just like the Tea Parlor’s—which is to say that they’re pretty damn good. The broth is lovely, and…

Actually, in Part I, I said of the Tea Parlor’s soup dumplings that you’d do best to just try them for yourself, and I think I’m going to have to stick to that assessment. For whatever reason, I have trouble describing these, but they’re intensely flavorful, and I love them. Go for it.

I’ve since tried the ho fun beef noodle soup with seasonal veggies and the Cantonese smoked chicken leg with ginger and scallion sauce—both via delivery, so I didn’t take any photos. Ho fun really aren’t my thing (I hate thin, floppy, wide noodles, but that’s just me; there’s nothing inherently wrong with Nom Wah’s), and there are too many good-for-nothing greens hanging around in the broth—but for me, the cilantro-heavy broth itself is what makes the dish worthwhile. (Plus, there are plenty of scallions floating around in there. Always welcome.)

I’m not much of a fan of the smoked chicken leg, though. The sauce is intensely garlicky, and the meat isn’t quite as tender as I would’ve hoped. I don’t taste scallion; I don’t taste ginger; I don’t even really taste chicken. I taste garlic. So while the meat itself is pretty good, the dish as a whole is seriously underwhelming. Oh well.

On the whole, though, I’m pretty into Nom Wah Nolita. My affection for the place may not be all that obvious from all I’ve just written—it’s been a pretty lukewarm write-up, I know—but you have to take into account, too, that it’s safe Chinese food we’re talking about here…served in a genuinely pleasant space, which helps a bunch. (What can I say? I’m 20. I’m in college. They’re catering precisely to me and mine.) I’ve only been by a handful of times, but I can definitely see this place becoming one of my weekend-lunchtime staples.