1 Comment
By Juliet Pizza, Places to eat, Technically not nut-free 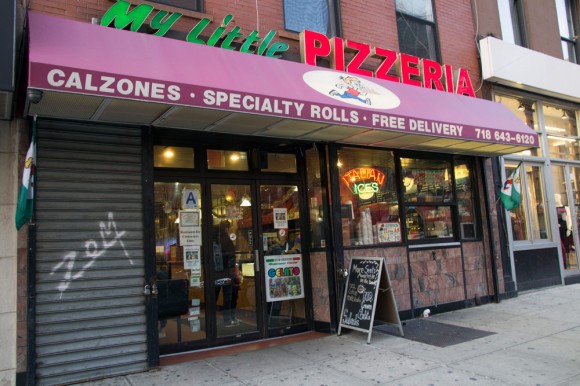 As a direct result of my going to high school in Brooklyn (Heights), I learned: that the subway is the greatest invention of all time; that Brooklyn might just be a better borough than Manhattan; that the Chipotle on Montague Street is the best Chipotle in the city (and perhaps the world); that the plaid-skirt private schools in my (Manhattan) neighborhood are actually sort of frightening; that the stoops and rooftops of Brooklyn’s brownstones are some of the best places to hang out; that Brooklyn is most definitely a better borough than Manhattan; and that My Little Pizzeria makes some of the best pizza in this whole city.

But as I wrote in my post on Joe’s Pizza, New York City regularly participates in a rather ridiculous best-pizza circlejerk—by which I don’t mean that we all mistakenly believe that our city has the best pizza, because that isn’t a mistaken belief. What I do mean is that the pizza places everyone touts as the city’s best—Joe’s included—are only so because…well, because everyone’s constantly saying so. They’re the Best-Pizza Options, so they’re the ones everyone’s always drawing upon when it comes time to make a Best-Pizza List.

Seriously. Google “best NYC pizza” all you want; no matter how many articles you read, you’ll continue to come across the same handful of recycled names. But I refuse to accept that those same places fill each and every list simply because they’re really just the best. Certainly, there are other pizza places that are as good (or…dare I say?) better. And I hereby submit My Little Pizzeria as my first piece of evidence.

Located on Fulton Street, between a GameStop and an American Apparel, My Little (as my entire high school called it) doesn’t look like anything special. And perversely enough, I mean that as a compliment. I can’t trust a pizzeria that looks “special”—immediately, I’ll start to wonder what’s wrong with the pizza they serve. But this place is refreshingly boring. There’s a pizza counter, an ice cream counter, two dining rooms, and a stupid-looking courtyard for those who insist on dining al fresco. Come winter, there are usually string lights and some dumb-ass blow-up decorations. Oh, and there’s a bathroom. That’s literally it—and that’s fine, because their pizza calls for no compensatory frills.

(You’ll have to excuse me. Sometimes, I get carried away and forget that I’m meant to be writing about food in the context of food allergies. Rest assured, though, that My Little is pretty allergy-friendly. There are no nuts in any of their food-food—and though they do have a few nutty gelato flavors, nothing in the pizza area should ever come into contact with anything in the gelato area. They’re separate counters, as I said—so in all, I feel entirely safe eating at My Little.)

Anyway, onto the food. The menu’s about what you’d expect from your average pizza place: garlic knots, calzones, rolls, and salads. I’ve never really considered getting up close and personal with a pizza-place salad, so I’m  moderately proud to say I have no opinions on My Little’s. With regard to everything else on their menu, though, I have plenty to say.

As with my meals, I’ll begin with the garlic knots. Like most garlic knots, My Little’s are pretty good—and at $3 for a dozen, they’re pretty cheap, too. They’re usually fresh and always warm, and they suffer from no shortage of garlic, thank God. In short, they’re fine: nothing special, but garlic knots aren’t really supposed to be special. They’re supposed to be cheap, greasy, and reliable—and these are, so I’m on board.

Now, it’s hard to bring myself to say anything negative about My Little, given how seriously attached I am to the place (and how many hundreds of hours I’ve spent within its walls)…but there’s no point in lying—including by omission—so here goes: their calzones are no good. They aren’t appalling—there’s plenty of cheese (mozzarella and ricotta), and the center’s always nice and warm—but they’re bland and boring, and the innards never quite fill out the crust. Oh well. 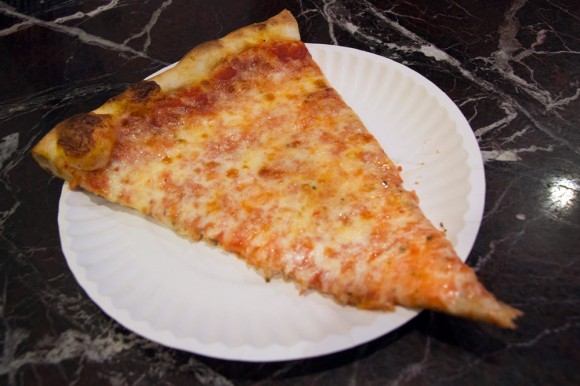 Before I start in on the pizza, I should probably mention that I’m going to be talking specifically about My Little’s plain pies—that’s plain, not “cheese,” because I wasn’t raised by wolves (or people from upstate)—as I’m of the belief that plain pizza is pizza in its best form. White pie? No thanks. Sicilian? Get real. Fresh Mozzarella? Ugh. Plain or bust. Direct all hate mail here.

Anyway, now that I’ve gotten that out of the way…I’m pretty confident in saying that My Little’s pizza is pretty much perfect. If you ask me, one of the marks of a good slice of pizza is that there’s very little to say about it (other than “…yep, it’s really good”), so this is going to be pretty challenging, but trust me: My Little churns out some reliably solid pies, especially around mealtimes, when they’re pretty much guaranteed to be straight from the oven.

The crust is perfectly virtuous; it rests at the mean between irritatingly crispy and doughy-as-fuck. It’s chewy, but not overly so—and for some reason, that’s pretty rare. The sauce is simple and refreshingly not-sugary  (also weirdly rare), and the cheese is creamier than most pizzerias’. Slices are salty, but not overly so, and there’s more than enough grease to satisfy a grease-lover like me. (And by the way: if you’re a grease-blotter, we can’t be friends. I’m sorry—that’s just the way it is. All hate mail to the aforementioned address.)

Plus, the guys who work the counter are great. For over 6 years now, they’ve been honoring each and every one of my sometimes-very-stupid requests (à la would you mind, uhh, cutting that slice into pieces?, which was my signature request for a month or two of my fifteenth year, during which I developed a weird, weird obsession with pizza “morsels”). And even though I only stop by once or twice a month now that I pretty much never happen to be nearby, most of them still know my name, and they never fail to greet me with a smile…or a wave, if I happen to be walking by. It’s the little things.

Find My Little Pizzeria at 114 Court Street, between Atlantic and State Streets.

One thought on “My Little Pizzeria”