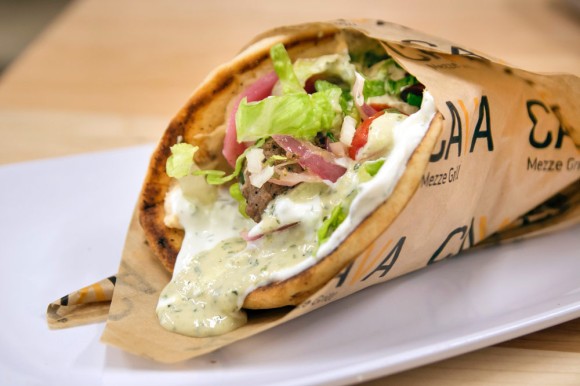 Cava is both like and unlike the sorts of places I’m usually most into. The nut-free kitchen, the proximity to NYU, and the assembly line–style ordering are all qualities we all know I stand no chance against, but Cava’s exclusive focus on Mediterranean cuisine and its potential to be so decidedly healthy are both pretty foreign to the Nut-Free New York world. (I just scrolled through my list of restaurants, and I guess I’m even more into junky, fatty food than I’d thought. Go figure.)

This place is a lot like Chipotle, but for Greek food. (If I had a dollar for every time I heard someone liken a fast-casual restaurant to Chipotle, I’d have enough for more than one double-protein entree at Cava. It’s just a lazy way of saying that the restaurant is predicated on a build-your-own-dish concept. But Cava really is a lot like the “Mexican Grill” I’ve grown so disillusioned with.) Five or six employees stand shoulder-to-shoulder at a long counter, taking turns scooping measured heaps of whatever you want into your bowl. You’ll choose your base, your protein, your spread(s), your toppings, and your sauce, and then you’ll exchange your $10-ish for the right to dig in. It’s quick, easy, and painless, and pretty much all the food is great.

Allergen information first, though. Before I even got to Cava’s contact form, I came across their allergen charts, below which the following magical sentence is posted: “We use no peanuts, tree nuts, or any other kind of nuts in our food.” (By the way, those same allergen charts are printed on the back of every menu. A nice touch.) I wondered—though a bit idly—about individual ingredients and whether they might’ve been cross-contaminated, so I sent Cava an email, and the response I received was as follows:

We can confirm that all of our restaurants are a nut-free facility. However, our cookies are produced in a kitchen that has a possibility of cross-contamination…Our pita is made on equipment that also processes sesame seeds and soy, but not tree nuts.

Which brings me to my next point of celebration: Cava isn’t just a restaurant—it’s a manufacturer, too. So a bunch of the ingredients they use in their restaurants (their pita and their tahini, for example, as well as a whole bunch of their spreads) are actually products that are made in Cava’s own facilities. That information did a whole bunch to allay any cross-contamination concerns I had—and by now, I’m entirely comfortable eating at Cava. (I’ve still decided not to categorize the chain as “truly nut-free,” as I haven’t found any reason to believe that they require all their ingredients to be contamination-free. Still, though.)

Anyway. There’s a ton of variety at Cava, which leaves you with lots of room to play around. And really, that’s what makes this place so much fun: the fact that you can get whatever the hell you want. A big-ass bowl of black lentils topped with grilled chicken, red-pepper hummus, some cabbage slaw, a scoop of tomato-and-cucumber salad, a sprig of mint, and a squirt of green-harissa dressing? You got it. A warm pita spread with hummus and tzatziki, then filled with a mix of meatballs and falafel, a generous heap of pickled onions, some tomato-and-onion salad, a handful of shredded romaine, a few crumbles of feta, and a whole lot of both lemon-herb tahini and yogurt-dill dressing? Sure thing. (Can you guess which of the two is my order? Hint: It’s the one with all the gluten.)

That, yes, is my signature order. I’ve actually never seen anyone else order a pita at Cava, but I just can’t get enough of them. They’re just so warm and fluffy—and in my eyes, at least, forking my way through a bowl is guaranteed to be a lot less fun than chewing away at an overstuffed pita. As for Cava’s protein options, it’s tough to go wrong. I’m equally into the grilled chicken, the grilled beef meatballs, and the falafel—I haven’t yet tried any of the others, actually—and I’ll typically go half-and-half (which is the way to go at Cava, if you ask me).

The falafel are a little weird, but I really do like them. They shed whole chickpeas like nobody’s business, and they don’t have much of that signature falafel flavor, but what flavor they do have meshes well with pretty much all of Cava’s spreads and toppings. (Plus, if you stop by during high-traffic hours, there’s a good chance they’ll be crispy, which makes all the difference.)

The chicken’s a little more flavorful than the falafel—the salt helps, for sure—and the beef meatballs are some of my all-time favorite meatballs, for whatever that’s worth. (Not so much, probably. I really don’t like meatballs. But these, on a good day, are essentially just juicy little balls of medium-rare steak, and I love them. Bonus meatball photo below.)

As for the spreads, toppings, and dressings, there isn’t all that much to say. Each and every one of the spreads is good—I like to keep it simple, but they have plenty of interesting options, like Crazy (i.e. jalapeño-filled) Feta, or eggplant-and-red-pepper dip—and the same is true of the dressings, too. Plus, all the ingredients that go into the toppings taste high-quality and fresh, and there’s absolutely nothing I’d warn against getting.

And that, too, is a big part of the fun: The fact that there’s nothing avoid-worthy on the Cava menu. I may not be the biggest fan of lentils or beds of greens or cabbage or cucumber, but that’s the beauty of this place, isn’t it? I get to have whatever I want (and when what I want just happens to be a calorie bomb, the folks at Cava don’t care). So I’m in. So, so in—and so grateful to have found something that’s so dissimilar, flavor-wise, from my usual haunts.

Oh, and by the way, Cava is the only restaurant I’ve ever come across that has a Maine Root machine. Serious, serious selling point. Maine Root’s Mexicane Cola is my all-time favorite bottled soda, and the fountain version is even better. I’m pretty much incapable of stopping by Cava without grabbing some Mexicane Cola, and I’m not ashamed in the slightest.