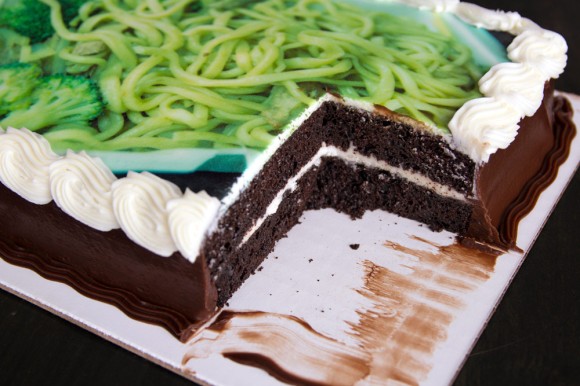 For my entire childhood, I had a single favorite birthday cake: chocolate, with buttercream icing, screen-printed with whatever strange photo I’d chosen that year. My mom, along with the majority of the adults who attended my birthday parties, preferred the Ciao Bella malted-milk-ball gelato cake we sometimes served, and though I loved that one, too, I thought it no match for my beloved photo cake. I was all about that buttercream icing (and all about getting to choose a photo, too), so for each of my birthdays, my mom would order that same cake from its same bakery—a bakery I don’t think I ever knew the name of, seeing as I was, like, 10—and each year, I’d happily devour it, sans even the slightest bit of an allergy-related trouble.

These days, I don’t do birthday cakes. Or birthday parties, or birthday gatherings, or much of anything birthday-related beyond, say, a nice meal out. (Go figure.) But when I found out about Cakes ‘N Shapes—one of NYC’s few, few, few nut-free bakeries, and home of some of this city’s best custom photo cakes, I’m told—I saw no other option. I absolutely had to get myself a photo-printed birthday cake, if only to see whether it’d be anywhere near as good as those of my childhood. (Plus, I do have this blog to run, after all. That’s how I justify the majority of my ceaseless eating…)

Anyway, I got the cake. This time, I ordered it myself, but my mom paid—birthday perk—and when I called to tell her about the bakery I’d chosen, we discovered that Cakes ‘N Shapes is the very same place we used to get my cakes from. My mom recognized Edie’s (the baker’s) name as soon as I said it, and from there, the rest was instant: of course I’d never had a reaction, of course the cakes’ designs looked sort of familiar, of course it was the same woman doing the baking. I’m not sure how that realization managed to elude me for the entire year Cakes ‘N Shapes spent on my to-try list, but it did.

Back when I was younger, though, my parents had no idea that Cakes ‘N Shapes was a nut-free bakery, nor did I (as I’d had no idea nut-free bakeries even existed). All we knew was that I liked the cakes, and that they didn’t seem to be killing me, and that I wanted to continue to eating them. So we kept ordering them, and then we stopped, and now we’ve bought another. Small world, I guess.

I had an incredibly hard time choosing what to have printed on my cake. When I was a kid, some horrible force compelled me to keep choosing my own goddamn face (see immediately above), but at 21, I have better things to stare at…like these pan-fried noodles from Tasty Hand-Pulled Noodles, which just might be the dish that’s excited me most in my time running this blog. Yes, yes—clearly, I choked. At the very last minute, I somehow ended up deciding that it’d be a good idea to have a photograph of a styrofoam container of lo mein printed on my 21st-birthday cake. Yes. I don’t want to talk about it.

My idiocy aside, Edie did a wonderful job. The printed photo was high-res and clear enough, and it was reasonably true to its original coloring, too (though you should probably refrain from parading your cake around in direct sunlight for any longer than a few minutes if you’d rather it not turn green, like mine did). It was a pretty cake—as pretty as any lo mein–adorned cake can be, at least—but even discounting its appearance, it was a good cake. Unbelievably moist and springy, the cake itself was flawless. And the buttercream icing was just as it should’ve been. The bonus chocolate icing around the edges verged on too-sweet, but it was great in small doses. And after a few days in the fridge, the whole thing only got better. 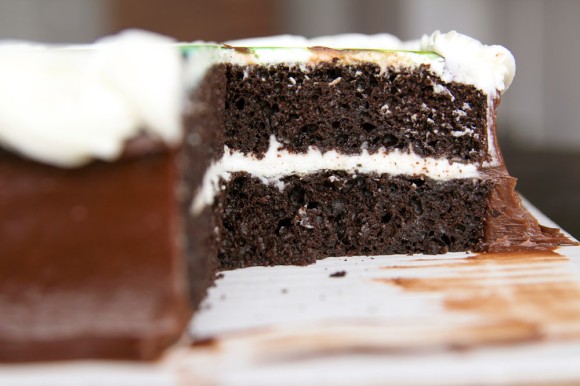 (I happen to be really into fridge cake. There’s something about the way the cake firms up, the way the icing thickens…honestly, the only thing better than a generous slice of fridge cake is a whole entire fridge cake, eaten directly out of the box with a day-old fork. My point, I guess, is that I might not be the best person to trust on the whole got-better-with-a-few-days’-refrigeration thing. It’s a good cake. A remarkably moist one. And it should probably be eaten fresh.)

That’s about all I have to say, really. Edie makes some damn good nut-free cakes—and though I’ve never tried her photo cookies, her cupcakes, or her free-form cakes, I have a sneaking suspicion that they’re probably pretty good, too.

Find Cakes ‘N Shapes at 466 West 51st Street, between 9th and 10th Avenues. Be sure, though, to place your order in advance, as Cakes ‘N Shapes doesn’t sell any sort of ready-made baked good.

[By the way: My birthday was at the beginning of May, if that gives you any idea as to how backlogged I am. The fact that I’m over a month into my summer vacation and still struggling to keep up with these posts has finally led me to the realization that I really do need to slow down, so that’s what I’m going to do. I hate rushing through posts almost as much as I hate the posts I produce when rushing, so from here on, I’m going to start experimenting with an every-10-days posting schedule. Maybe I’ll speed back up, or maybe I’ll slow down further. I don’t know. The next few posts are already in my queue, though. So don’t expect instant improvement. Wish me luck. Or motivation. Or something.]