Another fast food joint that isn’t nut-free—and one that barely exists in NYC, to boot. And it’s owned by bigots. Lovely.

What does Chick-fil-A have going for it, then? The answer is simple: decent-to-good chicken sandwiches that seem to be somewhat safe for the nut-allergic.

According to their allergen reference guide, Chick-fil-A does sell a few products that contain nuts: the oatmeal toppings, the granola, and the roasted nut blend (all three of which come in their own plastic packaging). I reached out to Chick-fil-A with a few questions about how they handle those nut products, and I received the following reply:

We have two pre-packeged products that contain nuts, the nut blend packet that is served with oatmeal, and the superfood side, and the granola that is served with the yogurt. These come in pre-packaged and are served in their package to the customer. We do not open the packages in the kitchen.

It would seem, then, that two of those three nut items are the same thing—and that none of their nuts have much of a chance of coming into contact with anything else in the kitchen. (It’s worth noting, though, that Chick-fil-A fries in peanut oil, though they don’t list peanuts as an allergen because highly-refined oils generally aren’t considered allergenic. Still, something to knowif you have a peanut allergy.)

Anyway, the food. Chick-fil-A has two locations in NYC: one in Herald Square, and one in an NYU food court in Greenwich Village. I’ve only been to NYU’s location, which is actually a Chick-fil-A Express (meaning they don’t offer the full menu), so I haven’t been able to try much beyond the chicken sandwiches, nuggets, and fries. What I have had, though, has been pretty good—especially for fast food. 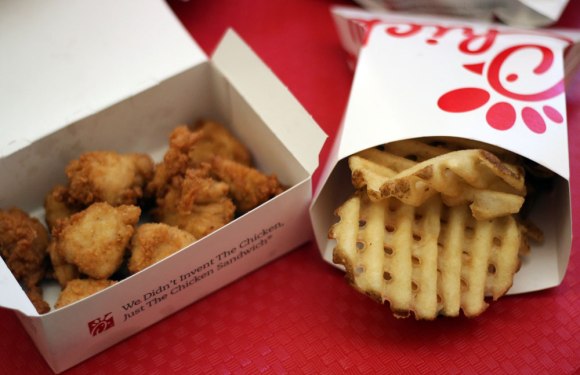 The classic chicken sandwich (just bun, chicken, and pickles) doesn’t live up to the absurd hype you’ll find online, but it doesn’t quite disappoint, either. It’s sweet and buttery, but (usually) not to the point of being sickening—which is all too rare in the world of fast food. I like to get the pickle-free version and add a little honey or mayonnaise, but it’s good as-is, too. All things considered, it’s a pretty solid sandwich.

The nuggets are about the same: sweet, buttery, and generally solid, if a bit boring. The real stand-outs, though, are the waffle fries: crispy, but never burnt—and nice and soft on the inside, but never, ever soggy (I’m looking at you, Five Guys). These are what I hope for when I buy fries, really. And they’re on my meal plan. Score.

All in all: Bigotry aside, Chick-fil-A is a decent place—and I’m not just saying that because it’s one of the only places I can actually spend the on-campus currency I always seem to end up drowning in, come the end of the semester. It’s fast food–quality, sure—but I’d take a Chick-fil-A sandwich over a Buttermilk Crispy Chicken (McDonald’s) or a Tendercrisp (Burger King) any day.

Find Chick-fil-A’s largest location in Herald Square (1000 Avenue of the Americas, between 37th and 38th), or stop by NYU’s Chick-fil-A Express in the Weinstein Food Court (5 University Place, between Waverly and 8th—and yes, it’s open to the public).