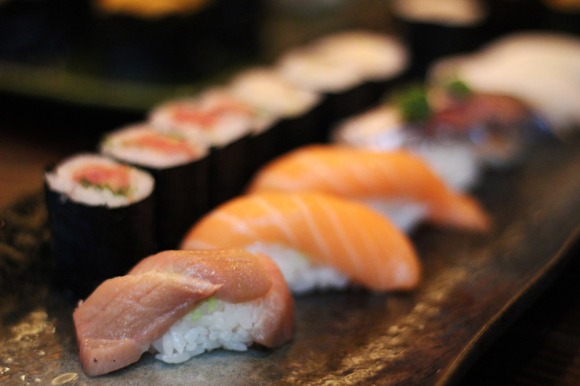 [Edit: As of October 4th, 2016, Ganso Yaki and Sushi Ganso are both gone-so. I happened to have been at Yaki on October 3rd, and they gave no indication whatsoever of their imminent closing. They’d just redone their menu, too. So heartbroken.]

Right next to Ganso Yaki is Sushi Ganso, which serves—you guessed it—a whole bunch of sushi. Now, I don’t love this place as much as I love Ganso Yaki, but it certainly isn’t bad, and I do believe it deserves a post of its own. So: Sushi Ganso. Here goes.

I’ve only been to (read: sat within the technical walls of) Sushi Ganso once, but I’m pretty familiar with their food, as I’ve ordered off their menu from next door quite a few times. Actually, I much prefer to do just that (eat at Ganso Yaki and order a few things off Sushi Ganso’s menu, that is), but this post is about eating at Sushi Ganso, so I suppose I’ll have to focus on doing that for now.

Now, I’m about to say some moderately negative things about Sushi Ganso, so I want to put some of its positives out there first: They have a nice selection of fish. Their food is true to what it should be, and there isn’t any of that weird whose-idea-was-this bullshit on the menu. It’s a small and relatively quiet restaurant, but it doesn’t feel cramped, and the atmosphere’s pleasant and laid-back. It’s easy to get to, it’s rarely crowded, and the service is good.

When I went, I tried the hirame usuzukuri (thin-sliced fluke with ponzu sauce) and two specials recommended to us by our server: the tuna tataki and the soft-shell crab. I also ordered a bunch of sushi (by the piece) and rolls, too, hoping all that would be enough to food to satisfy three hungry people.

The tuna tataki and the soft-shell crab came out first. Neither was all that memorable, but I definitely preferred the crab to the tuna, which was ice-cold and unimpressive, flavor-wise. I did like the usuzukuri, though—but it’s worth noting that I’ve never disliked anything that’s been dipped in ponzu sauce. In all, though, these three dishes were unremarkable; they weren’t bad, but they didn’t exactly leave me wishing for more, either. 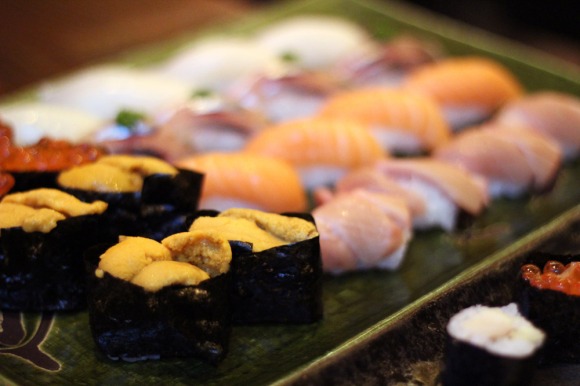 10 minutes later, I’d forgotten all about our appetizers—the giant plates of fish had arrived, and it was time to ogle. We’d ordered otoro (fatty tuna), uni (sea urchin), salmon, mackerel, ikura (salmon roe), and ika (squid), and my personal favorite thing in existence: a negi-toro roll (fatty tuna with scallions). Unfortunately, though, Sushi Ganso is no Hatsuhana, and while I enjoyed every bite of fish, I can’t quite say the sushi was worth the price.

The otoro (pictured in the foreground of the first photo above) was particularly disappointing. It was fatty and delicious, sure—but nowhere near as delicious as I’ve come to expect a $10 piece of sushi to be. Plus, the coloring was a little off-putting; it almost looked as if it’d been cooked. The uni was all right, though bland and too cold, and the ikura reminded me of Mr. Clean. The squid was good, though—not too tough, as squid often is—and I enjoyed the salmon, but it wasn’t anything special.

I will say, though, that the rolls are pretty good, especially if ordered as a supplement to a Ganso Yaki meal. I’m partial to both salmon and negi-toro, but you can’t really go wrong with Sushi Ganso’s rolls. (It’s not as if they have Philadelphia rolls or anything.) The only way to go wrong, really, is to try to fill up on their sushi alone. It’ll cost you a hell of a lot, and the food, while decent, won’t be worth what you’ll pay. By all means, though: Dine next-door, and sample widely—from both restaurant’s menus.