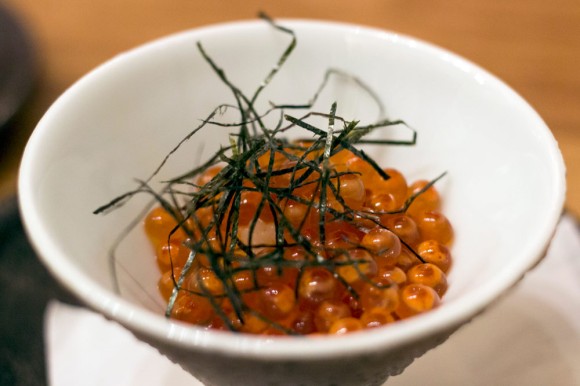 Sushi Zo is so ridiculously far out of my price range, it’s not even funny. But there are no nuts in their kitchen, and I did eat there safely, so…I’m afraid I have no choice. It’s time for another half-apologetic post on a jarringly expensive meal!

But first, the details. Sushi Zo started in Los Angeles, and you sure can tell. Theirs isn’t the classic, super-traditional sushi of many of NYC’s other top-tier restaurants; rather, it’s prepared “Zo-style,” according to chef Masashi Ito (click at your own risk; Kat Odell is…annoying, to say the least).

At Zo, there is only one option: a $200-per-person omakase, available only by reservation (which you’ll have to make well in advance). Don’t ask for a California roll; don’t ask for spicy tuna; don’t even ask for soy. Your chef knows best—that’s the idea, at least—and you’d be wise to do as he says (and only as he says).

If it weren’t for my dad and his undying love of sushi, I never would’ve dreamed of going to Zo. (Actually, had it not been for his undying love of sushi, I’d probably be sushi-ignorant enough to be content with, like, Kikoo, and thus never would’ve dreamed of dreaming of going to Zo.) But the man loves sushi, and he’s in frequent need of a dining partner or two—and that‘s how I managed to afford (well, to escape having to afford) such an expensive meal.

When we arrived—that’s Sam and me, as my dad was 15 painful minutes late—we were seated immediately at one of the restaurant’s two tables. (We all would’ve preferred the bar, but I wasn’t able to get three seats on a day that worked for us all.) Immediately, I fell in love with was the decor: bare brick, lots of wood, sparse greenery, Eames-ish chairs…it was perfect. Even the chopstick holders appealed to me. (I don’t have photos, because I felt like a real jackass pointing my camera every which way in such a nice restaurant. But I’ve linked the few I could find online, because Sushi Zo’s decor is probably my favorite out of all the restaurants I’ve ever been to.)

As soon as my dad arrived, a server approached our table to ask whether any of us had any food allergies. And as soon as I’d corrected my dad’s “nope, none” with an “actually, yes—I’m allergic to nuts,” the omakase had begun. (As I mentioned above, there are no nuts in Sushi Zo’s kitchen. It’s that simple. I haven’t included any further allergen information because there isn’t any. No nuts, no complications, no causes for concern.)

Onto the omakase itself. But first, a confession: I have absolutely no idea what I ate at Sushi Zo. I mean, I know what I ate—sushi, and lots of it—but I don’t really know what was what. Certain pieces (the uni, the shrimp, the tuna) were obvious, but others…well, the servers told us what they were, but I didn’t write anything down, and my memory’s failed me. So I’m sorry for the vagueness that’s to come—and I hereby promise to start taking notes on any subsequent many-course meals. (Really.)

Anyway. First came the sashimi, all at once, on a lovely little platter. There was lean tuna, two pieces of whitefish (that I can’t name), some octopus, and an oyster. I most enjoyed Whitefish #1 and the octopus, which was firm and chewy, though not tough—but the lean tuna was good, too. I wasn’t all that enamored with Whitefish #2 or the oyster, but overall, the sashimi platter was good, and by the time I’d finished mine, I was really looking forward to the rest of the tasting.

Within maybe two minutes, we’d already entered the next phase of the meal: sushi time. Piece after piece just kept showing up; as soon as we’d finished one, a server would clear our dishes and bring out the next—and like that, we got through more courses than I could count. (Literally. I lost track. 20-something? Not sure.)

The first piece—I know this one!—was halibut, topped with something yuzu-related. I think it’s the piece pictured in the top-left of the above photo, but who knows? In the top-right photo, there’s a mystery fish, and in the bottom-left, there’s sweet shrimp. That’s uni, of course, on the bottom-right—and fortunately, that’s all the identifying I’m obligated to do for the moment.

I do have a complaint, though. The fish itself was all incredible, but I really, really wish the folks at Sushi Zo weren’t so goddamn heavy on the toppings. I know, I know—it’s a high-end omakase, and I’m meant to trust my chef, etc., etc.—but constant toppings (beyond soy and wasabi) eventually end up making it supremely difficult for me to actually, you know, taste the super-high-quality fish in front of me. So there. I said it. I wish Zo’s sushi chefs would chill with the yuzu and the peppers and the whatever-the-fuck else it is they insist on placing atop nearly every single piece of fish. Sorry.

Then, there was chawanmushi, a sweet and creamy egg custard dish I’d never had before, and tamago, too (which was the best I’ve had, actually, since Honmura An closed in 2006-ish). And finally, there was a hand roll (we were each given the choice between tuna and blue crab—both were great) and a small bowl of soup (clear-brothed, with a big chunk of red snapper at the bottom).

Oh, and dessert. How could I forget dessert? Usually, I stay away, but at Zo, I didn’t have to. Our server assured me that everything, dessert included, would be safe for me to eat—plus, this dessert was about as simple as it could’ve been—so I dug in without (much) hesitation. Here it is, a (poorly photographed) house-made yuzu sorbet that I ate—and thoroughly enjoyed—sans issue:

In all, I spent a little over two hours at Zo, though it didn’t feel like much more than 30 minutes. It’s a very fast-paced meal—and then, just when you think it’s started to wind down, out comes a whole other set of courses to down. It’s an expensive tasting, sure. Worth $200 per head, pre-extras and pre-sake? I’m not sure. But the service is terrific, the ambiance is exceedingly pleasant, and the food—which ranges from good to offensively good—is a lot of fun, to say the least.

Plus, there are no nuts in the kitchen. And, if you sit at a table, the other diners are far enough away so as not to annoy with their probable…extravagance. (Not so far, though, that you won’t notice said extravagance. Seriously: So many of the people of high-end sushi bars just love to show off, as much to their servers and chef as to whomever might happen to be listening—hence the opportunistic glints to their eyes and their ever-so-slightly-slightly-raised voices. “‘It’s a thing,’ as you all say,” as my British Literature professor says.)

Anyway. The Zo experience is perfect.

…Near-perfect. Too many toppings. That aside, though, that omakase really was something special, and I hope one day—one day—to return. Maybe.

Find Sushi Zo at 88 West 3rd Street, between Sullivan and Thompson. (And if you manage to leave with any sort of room left in your stomach, there’s a nearby Morton Williams that stocks both A La Mode ice cream and a ton of Vermont Nut Free treats.)