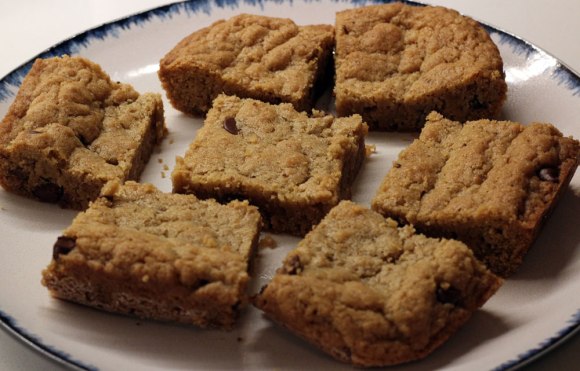 Safe baked goods are really, really tough to come by. Tough enough, in fact, that I’ve been trying to get my hands on a good blondie for years now. I have this memory of eating the world’s best blondie at an all-school picnic in the first grade—and while I can’t be sure of whether that actually happened, I can be sure of this: I’ve needed a blondie for a while now.

Two problems, though. I can’t find a good blondie I’m not allergic to, and…I can’t bake a batch of my own. It’s not even that I can’t bake; there are plenty of treats I can make from scratch, but for some reason, blondies aren’t one of them. No matter how closely I follow the recipe, they always come out terribly, and I’ve had no luck in figuring out what I’m doing wrong. I’d started to wonder whether blondies just aren’t as good as I’d hoped (and whether my 6-year-old self was just easily impressed by anything that contained sugar)—that is, until I tried these.

A while ago, in a more general post about Trader Joe’s, I mentioned their boxed blondie mix. Honestly, though, this stuff deserves a post of its own. It’s incredibly easy to work with (it is a mix, after all), and the blondies it makes are delicious. They don’t taste like they’re straight out of a box, and if you look at the mix’s ingredients, you’ll see why (spoiler: there’s no weird shit in it). Honestly, if you told me these blondies were home-made from scratch, I’d believe you.

I like to strain out about half the chocolate chips, but you can, of course, leave them as they are (and add more mix-ins, if that’s your thing). As with most baking mixes, the instructions are absurdly easy to carry out: preheat the oven, grease a pan, combine egg and butter, add mix, bake…and that’s it. I just might be one of the laziest people on this planet—I’ll sleep with the light on rather than getting up and turning it off—but this blondie-making process doesn’t deter me in the slightest.

Best of all, there’s no allergen warning on the box, and at Trader Joe’s, that tends to mean the product is safe. (It isn’t a guarantee—some Trader Joe’s manufacturers don’t label for cross-contamination—but it’s a good sign nonetheless, and I’ve never had any trouble with this mix, nor with any of their others that don’t come with “may contain” warnings.)

Anyway, I highly recommend giving this mix a try, especially if you are a) lazy, b) unable to bake, or c) of the opinion that brownies should be less chocolatey, dammit. Find it at Trader Joe’s.