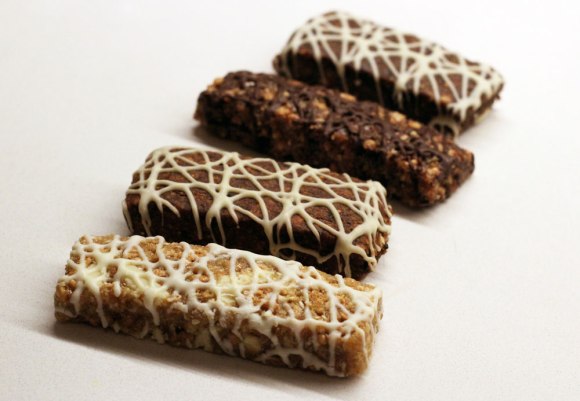 I first heard about Don’t Go Nuts online, in the midst of one of many searches for nut-free granola bars. And while their bars aren’t quite granola, they’re nut-free—so I figured I’d give them a try.

Allergen information out of the way first, though. According to their FAQ, all of their products—both bars and spreads—are produced in a nut- and peanut-free facility, and they use their own signature Field to Fingers process to ensure their products really are safe for those with allergies. Plus, all their products are also certified gluten-free, and there’s no egg or sesame in their facility, either.

Anyway, I pulled up their store locator (which I’ve since learned has been out of order for a few months and which won’t be fixed for a few more) and was directed to Whole Foods and Lot-Less. Easy enough, I thought—I’m at Whole Foods often enough, and (for reasons I really don’t understand) there are three or four Lot-Less locations within walking distance of my apartment.

Long and incredibly boring story short, I went to two different Whole Foods locations and pretty much every Lot-Less I could find (over the course of a few weeks, mind you—I’m not that obsessive), but I didn’t see Don’t Go Nuts anywhere. The Lot-Less on Chambers Street has multiple walls and shelves devoted entirely to bars, but there wasn’t a Don’t Go Nuts logo in sight. Huh. I would’ve just caved and ordered them online, but Amazon only carries them in boxes of 12, which was a bit too much of a commitment for me, given that I’d never tried any of their flavors.

Really, really not wanting to blindly spend $20 on a box of 12 “snack bars,” I reached out to Don’t Go Nuts in the hopes that they’d be able to point me toward a store that actually carried their products. I ended up speaking with a very helpful woman who informed me that they’re currently in the process of switching to a new digital agency partner, hence the outdated store locator. In the meantime, though, their bars are sold at Fairway, Balducci’s, Westerly Natural Foods, Foodtown, Grace’s Marketplace, King’s, and Shop Rite. Plus, Lucky Vitamin and Vitacost sell individual bars online—which fact I apparently overlooked in my search.

What’s more, Don’t Go Nuts was generous enough to send me a few samples—two of each bar, actually, and a bunch of their soybean spreads, too. I certainly wouldn’t have had the money to try so many of their products within a timespan short enough to allow me to actually the compare the flavors effectively—so I was pretty grateful for the samples. And to get to the point, finally: I really enjoyed a lot of what I ate.

My favorite bar was definitely the Whitewater Chomp (granola with white chocolate chips and white chocolate drizzle). It’s very sweet—everything I tried was—but I’m not really complaining. It tasted a lot like coconut-flavored cookie dough (though Don’t Go Nuts is coconut-free), and it had a nice texture, similar to that of a Quaker Chewy Bar. I liked the Celestial Campout bar (honey graham with white and dark chocolate) as well, though the chocolate they use isn’t the tastiest—so perhaps the Boogie Board Bash (same deal, but without the dark chocolate) would be a better choice.

I will admit, though, that I wasn’t a huge fan of the fig flavor that was so strong in some of the bars (Blueberry Blast, Lift Service). But maybe that’s just me. I’ve never been a huge fan of fig-based desserts. Overall, though, the bars were pretty decent. Be warned, though: If super-sweet bars aren’t your thing, stay away from Don’t Go Nuts. If they’re for a child, though—or if you have huge a sweet tooth—they’ll probably be perfect.

The spreads are good, too—but only as a last-ditch substitute for peanut butter. I liked the Slightly Sweet and Chocolate flavors best, but both were a bit watery. They definitely had that strange imitation-nut-butter flavor, and the texture was off, too. (But perhaps I’m just being picky because I can actually eat the real deal; if I were allergic to peanuts, I’m sure I’d be really grateful for these.)

In all, Don’t Go Nuts is a pretty solid company, and their products are worth the effort it takes to seek them out and give them a try, if you’re in the mood for something super sweet. Just…try not to go nuts looking for them. (I’ll see myself out.)

One thought on “Don’t Go Nuts”