[Edit 2: As of March, 2018—or maybe earlier, I have no idea—Baz is once again nut-free. Back to rice flour for the gluten-free bagels, I’m told. Rejoice?]

[Edit: As of October, 2017—or maybe earlier, I have no idea—Baz has started to offer gluten-free bagels made with almond flour. As all the equipment’s shared, I’m no longer comfortable (in the slightest) with Baz, so I’ve gone ahead and taken them off my list. I’ll leave the post up as a record, but if you’re allergic to almonds, I can’t any longer recommend you go to Baz.]

It’s no secret that I love bagels. I have an entire category dedicated to bagels on this blog, and I think I’ve made it clear that I’ll do almost anything for a good one. But safe bagels are really, really tough to find. Bagels themselves almost never contain nuts, sure—but try finding a bagel store that doesn’t do pastries and/or nut-based spreads, too. (Alternatively, don’t bother. I’ve spent hours and hours trying, and it’s pretty much impossible.)

Now, Baz does sell pastries—though you won’t find them on their online menu—but they aren’t made in house, so I’ve been assured that cross-contamination is essentially a non-issue. (I’m not sure—and neither was the woman I spoke with—whether any of the pastries Baz sells actually contain nuts. All she said was that she couldn’t quite guarantee that they were safe, as she didn’t have much information about their baker’s facility. Fair enough.)

Pastries aside, though, I was told via email that “the only thing with tree nuts is almond milk for the coffee. Otherwise, all clear!” To me, this isn’t a huge deal, as almond milk is pretty self-contained. Still, comfort is subjective—so if you’re considering eating at Baz, please be sure to do your own research and only proceed if you feel comfortable doing so.

In any case, I felt comfortable enough with the information I’d collected on Baz. (Plus, with food like theirs, how could I resist?) So early last Sunday morning, I made my way over to Grand Street to get myself a long-awaited bagel. For my first Baz experience, I kept it simple: an everything bagel with Nova lox and plain cream cheese—and it certainly satisfied my craving. The bagel itself was fine (not the world’s best, but fine), and the lox was…well, it was lox. Delicious. 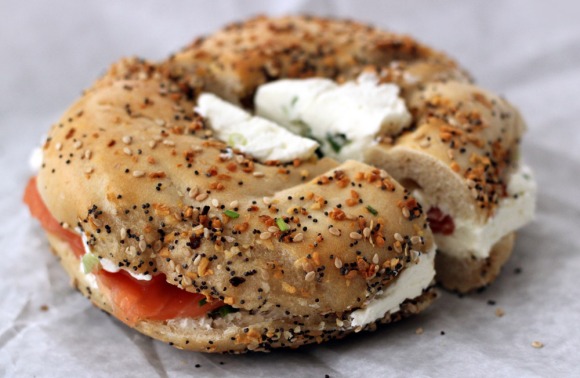 I’ve been back a few times since—I wasn’t kidding about loving bagels—and so far, everything I’ve tried has been wonderful. My two favorites are probably the Mooch (Scottish salmon, sable, cream cheese, tomato, onion, and chives) and the BAZ (Nova, scallion cream cheese, tomato, and onion). If I had to choose, though, I’d probably go with the Mooch, because a) sable’s awesome, b) I prefer the Scottish salmon to the Nova, and c) the chives make a huge difference. I do have one complaint concerning these two sandwiches, though: The tomato sucks. Tomatoes are out of season right now, though—so maybe that’ll improve. [Edit from the future: There was no improvement.]

I’m also a huge fan of the wasabi tobiko cream cheese (even though I generally don’t like the flavor of wasabi). The flavor isn’t too harsh, and the tobiko itself adds a great texture to the bagel-and-cream-cheese combo. The whitefish salad’s good, too (if a bit sweet), and the Nova and chive cream cheese is Nova-heavy and pretty much perfect. Honestly, nearly every spread or spread-like thing I’ve tried at Baz has been decent or better (but maybe that’s just because I know better than to go for some of their stupider offerings—I’m looking at you, blueberry cream cheese).

You can also dine in, if you’re so inclined—though I wouldn’t quite recommend doing so, as the service is (in my experience) painfully slow, and they tend to bring out a complimentary dessert toward the end of the meal, which isn’t ideal for those who are concerned about allergens. No big deal, though; Baz does counter service, too—and they’ll deliver to you (for free!) if you live between Worth and 10th Streets on the north-south axis and 6th Avenue and Essex Street on the east-west axis. (For the rest of us, I suppose there’s always Postmates and Amazon Prime Now.)

Is Baz perfect? No. Cheap? Not at all. Are their bagels the city’s best? Definitely not. But are they the safest bagel place I’ve been able to find in a few years of searching? Well, they certainly seem to be. And hey, their food is pretty damn good. So if you’re as into bagels as I am—or even if you aren’t—I’d certainly say Baz is worth a try. I, for one, am very ready to become a regular.

Anyway, if Baz’s handling of allergens seems like it’d meet your standards, you can find them and their bagels at 181 Grand Street, between Baxter and Mulberry. Beware, though: They get pretty busy around lunchtime, and they close at 4pm.